Does liking rap make me a bad feminist? 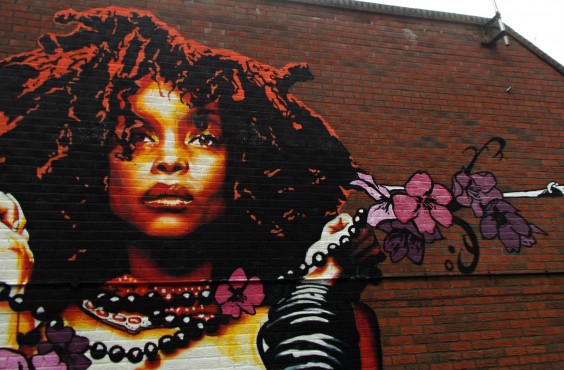 Erykah Badu, represented here by Eva Mena’s street art on a London wall, is one less problematic artist for feminists who like rap music. Photo by Tony Monblat via Flickr

My name is Jess, and I am a feminist who loves rap.

“Hi, Jess,” the group of feminists say back with disdain, clutching their copies of Gloria Steinem’s A Book of Self-Esteem, Revolution from Within. I prepare myself in case one of them tries to hurl a copy of The Bell Jar at my head, ready to dodge it just like George Bush did the shoes of that Iraqi journalist.

Rap is pretty much the only genre I listen to. Every concert I have attended as an adult has been a rap concert, including A$AP Rocky, Vince Staples, Danny Brown, and Chance the Rapper (other concerts I have been to include Bif Naked, Hillary Duff, and — wait for it — Nickleback, but I try not to include those in any form of discussion centering around my musical tastes). I don’t think I have ever touched a Spotify playlist that I myself haven’t made in order to avoid an accidental run in with pop or, even worse, country. To be honest, the only time I avoid rap is when it’s a verse tacked on to some cheesy Taylor Swift song attacking Katy Perry (sorry, Kendrick).

But whenever I’m blasting one of my favourite artists like A$AP Ferg or Joey Bada$$ to drown out the ghosts of Chad Kroeger’s past, I sometimes can’t help but to stop and think to myself, “did Schoolboy Q just tell me to ‘lift [my] shirt and show a player what [I’m] worth’?”

Yes, as a feminist, rap music can be problematic.

Even the large number of artists who do respect women and even identify as feminists tend to use words like ‘bitch’ and ‘hoe’ in their lyrics because they are catchy as hell and make you feel badass when you’re singing them (unless you’re Eminem’s mum listening to your son call you a ‘slut’. Sorry, Debbie.)

Though I don’t condone lyrics that promote violence against women, I still love rap music. There are plenty of ways to avoid songs that are harsher than the rest without abandoning an entire genre. For example, maybe skip listening to Eminem. Other rappers, such as Jay-Z and Smino, have countless great songs that don’t involve killing their wives.

For example, true feminist scholar A$AP Rocky has been known to say things like, “pussy makes the world go ‘round” and several times has rocked a Dior t-shirt that reads, “we should all be feminists,” (although, ironically, this shirt was most recently worn in his and A$AP Mob’s hit song “Wrong” [really good song] about cheating on women).

Artists who have talked about women’s experience include Mac Miller, Lupe Fiasco, Danny Brown, Young Thug, and Kendrick Lamar, while artists like Chance the Rapper maintain nothing but the utmost respect for women in their lyrics.

In a July interview with Pigeons and Planes, Vic Mensa was asked what surprises him about hip-hop today, and he responded with how violence against women affects some artists’ careers positively.

“I think that beating up women as being a catalyst for rap success — which I’m really seeing in 2017 — is a horrible trend. Very bad. That used to be something we condemned you for,” Vic says. “They’re not problematic artists, they’re cowards.”

Let’s face it, Mensa is right. The fact that artists like Chris Brown are more famous than Vic himself is proof enough. What gives me hope, however, is that mainstream music industry artists are losing fans to the likes of Soundcloud rappers and label-free revolutionaries. The big guys on top, standing with their heads in the clouds atop some record label’s high rise, are on their way out, and the up-and-comers are more socially aware than ever.

Mensa serves as an example for rappers standing up for women in the business, whereas artists like Chris Brown are definitely on my boycott list. While rap does provide a platform for oppression and violence in some regards, there are plenty of the same issues across the rest of the music industry, as well as in the professional sports world and media in general. What are we supposed to do, stop enjoying everything altogether? Or simply pick and choose who we listen to and support?

Artists such as Lil Uzi, Duckwrth, and Young Thug are promoting gender fluidity in the way they choose to present themselves. Even though a lot of the time they are dragged through the dirt by the media or old school rappers such as Joe Budden, their style remains a part of who they are. While wearing a $4500 women’s blouse and a Goyard purse certainly doesn’t automatically make you a women’s advocate, we are seeing changes in how the upcoming generation of rappers view gender.

Let’s also not forget that there are plenty of female artists like Missy Elliot and Erykah Badu whose lyrics are pro-women. Seeing women thrive in an industry that has often embodied their oppression is quite empowering. Missouri-born rapper SZA is a prime example of this. As the only signed female artist to the record label TDE (the same label that signed Kendrick Lamar and ScHoolboy Q), she stands as a perfect representation of women in the formerly male-dominated industry that is hip-hop. Her debut album Ctrl, for example, is largely about sexual freedom — one of the largest issues in hip-hop today.

While male artists are praised for speaking about how many ‘bitches’ they’ve slept with and disrespected — in Drake’s hit ‘Forever’ he raps, “I’m shuttin’ shit down in the mall/And tellin’ every girl she the one for me/And I ain’t even plannin’ to call” — women are called ‘hos’ and ‘sluts’ for taking control over their own bodies. SZA serves it back to men while demanding respect, giving men a taste of their own lyrical medicine on Ctrl’s first track ”Supermodel”. She sings, “Let me tell you a secret/I been secretly banging your homeboy/Why you in Vegas all up on Valentine’s Day?”

What’s important to remember above anything else is that, just like feminism, rap doesn’t have to be categorised into any one box. If you have a problem with certain aspects of the genre or certain artists, you don’t have to abstain from rap altogether. There isn’t some feminist god who, when you die, decides whether or not you’ve done your feminist duties by not listening to rap and if your soul can spend the rest of eternity drinking tea and petting cats.

Just take the aspects of rap you enjoy and say “bye, bitch” to the ones you don’t.