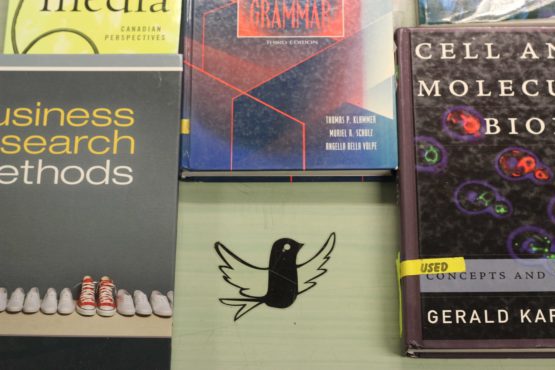 Get those textbooks outta here. Photo by Cormac O’Brien

It’s that time of year again: you stand in the bookstore line for half an hour, look away as the three digit total you owe pops up on the screen, and transfer over several months’ worth of grocery money for a pile of paper thicker than any tree trunk on campus.

Soon, it will be the time of year for realizing that of the thousands of pages of paper you bought in January, you’ll probably read through 200 at most. You’ll also realize that those 200 pages probably could have been condensed down into 50, if the professors had really tried.

I’m hyperbolizing here, of course, but what’s frustrating is how little I have to exaggerate to make the entire situation ridiculous. In an era of ebooks and freely available information online,  we continue to pay for published textbooks that we hardly read. Besides hurting our wallets, this also harms the environment, and what’s more, many of the pages we read through contain mostly extraneous information, requiring students to crystallize the relevant tidbits from the slag of surrounding text.

Often, we have to guess at what might be testable and what we ought to forget as quickly as possible in order to free up valuable mental space.

All the information we’re reading can be coalesced from online sources for free, and once that happens, someone only needs update the document occasionally when new findings come out that contradict the original text.

Assume a small class at UVic consists of 20 students, and that the textbook for that course costs $50 (I know, you’re probably salivating at the thought of such an ideal class, but if you want those kind of class sizes at that cost you’ll need to go to Camosun, and suffer your friends mocking you for the remainder of your degree). Such a theoretical course has a total textbook cost of $1000. Now assume that the general outline of the information for that course is already available, as all are. If you pay a grad student $20 an hour to comb the internet and create a document based off that information, how long do you think it might take? A day? A week? Two weeks? Even if it took them two weeks of full-time work, the cost would be surpassed after four years of study, and for each year after that we as a student body would be saving money.

So why isn’t this done? For the same reason that some professors are willing to use Coursespaces, some hand their worksheets out in class, and some use morse code from across a crowded lecture hall and hope you can pick it up (because they’ve picked a hidden office, and don’t show up to the hours anyway). Past a certain point, these professors will do whatever is easiest for them, and the idea of transferring their system of education from the Dewey Decimal System into the digital era is a daunting prospect that many will do anything possible to avoid.

Don’t get me wrong: professors work very hard for the benefit of their students. But UVic seems to have set up Coursespaces as a very clear platform where work can all be observed at once. For example, deadlines for various courses can’t creep up on you because every time you log in all your due dates are right in front of you (a sensible idea).

Matters would also be clarified considerably were a digital pamphlet for each course to be posted with the words ‘EVERYTHING HEREIN IS TESTABLE — NOTHING WITHOUT IS NOT,’ in large friendly letters on the front. So why has such a move not been made?

Because who’s going to make them? Once they teach for a few years without outright assaulting a student and with a few dozen published pages about the use of the third comma on page 47 of Macbeth, they have tenure — from then on those professors are a more permanent facet of the university than the buildings or the local animal populations (insert rabbit reference here).

Some professors have of course taken steps in the right direction. Fill-in-the-blank notes and coursepacks are fantastic, if still frustratingly unavailable in digital formats. But without widespread regulatory changes which force our professors to stick to one format, many will continue to do whatever is easiest for them.

Students, meanwhile, must ensure our documents are handed in as .doc files to the correct assignment dropbox with the correct heading at the correct time, line spacing is like this, margins like that, put your title here, and so on and so forth. You’ll lose pretty well all your marks should you differ in the slightest from this prescribed format. This makes things easier for the professors who do the marking, but they aren’t returning the favour — and UVic isn’t making them.

We’ve invested in classrooms covered entirely in whiteboards (meaning no one can consistently see what’s being written), classrooms covered in computer monitors (I was in one of these rooms — my teacher tried to switch us out but no one would take the space), and in a huge advertising campaign to demonstrate how sharp (well-edged) we UVic students are.

But despite all this, physical textbooks and widely variable organization strategies remain frustratingly present.