Double exposure: Why we published the uncensored 1992 Martlet cover 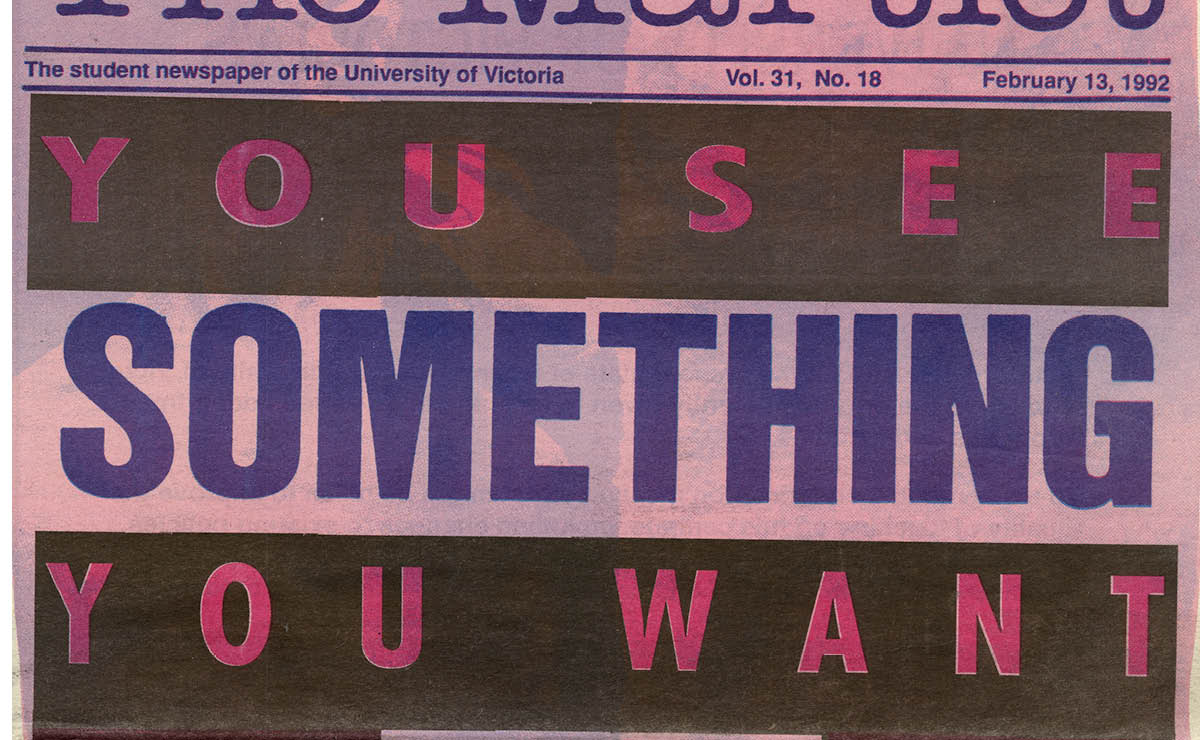 Before you read this, we hope you’ve taken the time to look at our feature story, “UnCovered: The Story of Student Newspapers, Advocacy Journalism, and Genitalia.”

If you did, you likely have a few questions, one of them being why we opted to publish an uncensored image of two sets of genitalia, especially when doing so 25 years ago caused so much controversy. Why not opt to censor them and avoid the issue entirely?

The answer is simple: readers deserve the full story, and we have an obligation to give it to them. And sure, we might run the risk of offending a few people by doing so, but that’s the same for everything we publish—with or without genitalia.

In producing this issue’s feature, we couldn’t help but notice the parallels between the decision facing the Martlet newsroom then, and the newsroom now. Then, the editors of the Martlet were presented with a cover that was blunt, radical, and, if we’re being honest, a little reckless. But they ran with it, damn the consequences, and 25 years later, we were presented with the same choice. What to do?

It’s impossible not to think about what would be done differently had J.B. MacKinnon, Alisa Gordaneer, and co. worked at the Martlet in 2017. Because though the parallels are evident on the surface, we recognized that the contexts are radically different. In 1992, there was no ‘T’ or ‘Q’ in ‘LGBTQ’ (even those five letters don’t cover the entire spectrum), and it shows in what the cover presents: cis-normativity, and a binary that strictly delineates between male and female on the basis of what’s between your legs. It effectively erases identities that existed then and now, including transgender and gender-fluid people.

We also considered the current discourse around issues of consent, especially in light of UVic’s ongoing pursuit of a robust sexualized violence policy. How do we accommodate readers who may not want to be confronted with these images? We considered compromises, of course: what if we censored it for off-campus readers, but left it untouched in copies on campus?

That was just one possible solution. But when it came down to it, any sort of compromise that involved tampering with the cover would be in its own way a judgment on the decisions made by the Martlet 25 years ago. Like MacKinnon said, the question then was not “why?” but “why not?” And though the times have changed, the question stays the same.

Ultimately, we have a responsibility to tell the whole story, and without the cover, there is no story to speak of. Its original publication marked a pivotal moment in the Martlet’s history, and to republish it 25 years later is to honour that history.

Maybe 25 years from now somebody will look back on our decision the way we looked back at MacKinnon’s and Gordaneer’s. If they do, we hope they recognize that while it was not an easy decision, we believe it was the right one. The 1992 cover represented an ideal, and we strove for it in order to honour it.

Not everyone at the Martlet agrees with the decision made in 1992, or today, but we all agree that the values of anti-oppression, love, and acceptance that the cover embodied are ones that must be fought for.

Those ideals are not worth censoring.

Correction: Similar to the feature itself, we’ve edited the phrase “male and female genitalia” to “two sets of genitalia,” recognizing that the original wording implicitly gendered each.