A group of clearly intoxicated college-aged men were observed on the 14 bus Wednesday night conver-sing at a decibel level much lower than would typically be expected after having several drinks and taking public transit.

“It was really quite shocking,” said regular bus-rider Dina Callahan. “I was prepared to sneer derisively from the moment I saw them board, but the opportunity never presented itself.”

Witnesses say that parents who would ordinarily be preoccupied with covering their children’s ears were free to ignore the men completely and play Candy Crush instead. It appears not everyone, though, is considering this a positive development.

“I think it sets a dangerous precedent,” remarked local lush Alan Harrelson, briefly pausing to belch softly and make fearless advances at a woman clearly out of his league. “It’s almost as if they’re admitting that not everything they say is really funny or interesting and needs to be ear-splittingly bellowed for everyone on board to hear.” 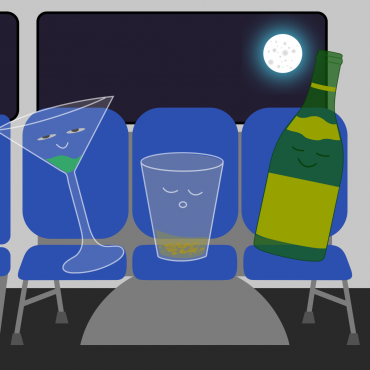 Others doubt the accuracy of eyewitness accounts, calling into question exactly how bombed these gentlemen actually were.

“I’d be lying if I said I didn’t have some unanswered questions,” commented Sociology major Darrell Dickinson, self-proclaimed expert on drunken male behaviour. “No obviously embellished anecdotes of romantic conquests? No teary-eyed “I-love-you-man’s” that would never surface without serious drinking involved? No greenish-coloured faces indicating the likely reappearance of the evening’s refreshments? These are the earmarks of the truly ‘pie-eyed’. At a glance I’m inclined to believe these fellows were at most ‘tipsy,’ perhaps even just ‘buzzed.’”

None of the men involved could be reached for comment. While there are no leads on their whereabouts, experts are operating under the theory that their erratic behaviour likely continued for the remainder of the evening. The agency tasked with the investigation issued the following official statement early this morning:

“Conventional wisdom would suggest that, upon arriving at their residences, these men ate spray cheese directly from the can before initiating a greasy Tinder session.  We have no choice but to assume that in actuality they turned in immediately upon arriving home to avoid disturbing their neighbours after both brushing AND flossing their teeth.”

If you have information regarding this incident or any other atypical drunken male behaviour such as using a napkin instead of a shirt sleeve, authorities are asking that you come forward immediately.