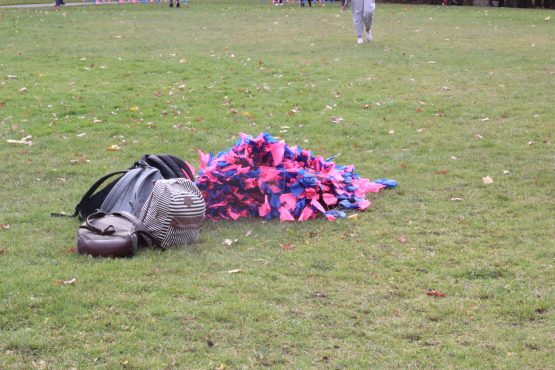 Flags from YPY demonstration piled up after removal by counter-protesters. Photo by Cormac O’Brien, Editor-in-Chief

The space that exists between the sides of the abortion debate is one that has never been easy to navigate. Every individual story and circumstance raises new questions as to where the balance lies in Canadian law. However, after the events of the demonstration led by Youth Protecting Youth on Nov. 16, my mind is left overridden with questions surprisingly unrelated to abortion: When did we stop listening to one another? And when did we become so cemented in our opinions that we let the conversation die?

As students were returning from reading break, they were met with thousands of small pink and blue flags littering the Quad lawn. The display was held to protest the fact that Canada presently has no restrictive abortion laws. (In 1988, the federal Supreme Court ruled previous laws on abortions unconstitutional. The law, which restricted the circumstances in which a person could choose to have an abortion, violated the right to security of person under section 7 of the Canadian Charter of Rights and Freedoms.) The demonstration didn’t endure the heat from counter protesters who uprooted the flags from the ground. Social media was laden with polarizing and repetitive comments.

Due to the demise of the demonstration, the issue of free speech on university campuses has arisen once again. When we come up against hot button issues such as abortion, intense emotions naturally start to brew within us all — emotions that can lead us all to act in ways that surpass passionate and head towards uncivilized. These kinds of behaviour have been exhibited by both sides of the debate on a loop. It was witnessed at a 2012 choice chain demonstration, where graphic images of aborted fetuses were held up in an effort to shame women for their choices. It was witnessed again at a 2014 UVic-hosted debate on abortion, where pro-choice hecklers shouted explicit messages in an effort to drown out the voice of a pro-life speaker. And yet again, we as a student body have arrived at the same place, trying to navigate this uncharted territory using the same tired “protest, counterprotest” approach that has been proven time and time again to be completely ineffective.

As we are all here for the common goal of educating ourselves and broadening our worldviews, I have to pause and question why we choose to place those destructive emotions at the forefront of our decision making. This issue incites anger because the two groups at stake — women and children — are pitted against each other. Whose rights take precedence? In regards to the actions of the counter protesters, I wonder if the all-consuming fear of allowing hate at school campuses has somehow caused a similar hate to develop inside ourselves instead: a deeply burning hate towards opinions that differ from our own.

This age old debate isn’t about an answer. It isn’t enough anymore just to be “right.” You have to prove arguments illogical, and to do so one must roll up their sleeves and wrestle the conversation to the ground. But stating an opinion, no matter how loud, will not incite change, because you cannot deafen an ideology with shear volume. This is true, whether you comment on a Facebook post, or show up in the flesh demanding justice. To have this open dialogue, we must individually listen, dissect every word, and demand and provide factual evidence that drives whatever argument we choose to make. As a cohesive student body, we must defend the universal right to engage in conversation, no matter what the issue.

Moving forward, with all of this in mind, we have to respectfully keep the dialogue alive — no matter if we uncover an answer or not. And maybe that is the point. Universities are supposed to be huge grey areas. They are a place of intellectual sanctuary, where we are meant to question and explore our beliefs. The very freedom we are so desperately fighting for others to obtain is what the walls of this institution are built from.

What a privilege that is for us all to possess.