Flushing away the career-change malaise 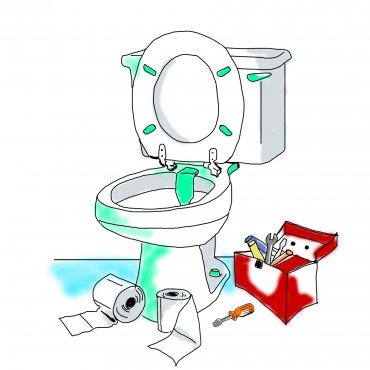 Since stepping down as editor-in-chief of this fine publication, I’ve had the chance to reflect on what I want to do next in my life. I’ve thought about starting a podcast, exercising more, volunteering at local charities, and so on. But hey, could you hand me that wrench over there? No, the smaller one.

See, I’m a big believer in attainable goals, and while I might want to start the next Radiolab or Serial someday, I just want to get this bidet toilet seat installed. It isn’t hard; just look at the instruction poster! There are only, like, four steps! Now hold that hose for a second. I’m just going to turn off the water supply so I don’t get soaked.

While waiting in a hotel lobby a few months ago, I read this New York Times article about how high-tech bidet toilets were becoming popular in North America. I’ve heard of them in Japan before, with their fancy massage functions and automatic seats, but I never thought I could afford one. But lo and behold, there was a basic cold water model on Amazon for only $60! How could I resist? I didn’t need the fancy stuff, and on my budget it was out of the cards anyway. What I needed was a nice starter unit. Yeah, just don’t tighten that nut too much, okay? Just finger-tight is good. You don’t want to crack it.

Now, why would an otherwise normal 22-year-old undergrad want a cut-rate bidet toilet seat from Amazon.ca with four different fonts on its control panel and fake stainless-steel knobs? I’ll tell you why. I’ve hated toilet paper for as long as I can remember. It’s expensive, inconsistent, and all that paper bleaching can’t be good for the environment. It certainly isn’t good for my bum, no matter what those Charmin bears say. No, I don’t need a Robertson head screwdriver, I need a Phillips. Any size. No, that’s too small. That’s an eyeglass screwdriver. That’s not what I meant by any size. WELL WHO’S GOING TO SCREW DOWN A TOILET SEAT WITH A #0 . . . I’m sorry. I didn’t mean to yell. I’m glad that you’re helping me out.

Oh, dear. Now the seat doesn’t lie flat on the toilet bowl rim because the attachment lifted the seat a little higher on the back. Now every time I sit on it there’s this click when the front of the seat hits the rim. This won’t do. This won’t do at all.

Back when I was a professional editor, I sat at the computer a lot, finding sources, checking facts, and sending emails. Now I use those skills to filter through the “Deals” section of Amazon, trying to save a little extra on memory cards or, in this case, stick-on rubber bumpers so my toilet seat doesn’t lie slanted on the porcelain rim. It might not sound quite as hard as my old job, and it isn’t, but that doesn’t mean it’s any less important.

Until those bumpers come in the mail, I’ll just have to deal with the slant. It’s not so bad. Just think of all the money I’ll save by not buying toilet paper! As a bonus, I’ll get to feel so much fresher and cleaner. And the best part? No one will have to ask if I’ve got a bidet toilet seat — they’ll know I have one just from the smile on my face.