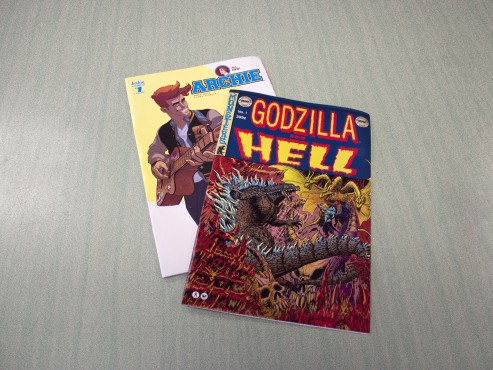 Archie comics have seen a renaissance in recent years, with the 2013 launch of Afterlife with Archie and the introduction of an openly gay character being just a few ways that the series has updated its appeal for contemporary audiences who don’t necessarily buy their comics from grocery store checkout lines.

Archie #1 is a re-imagining of sorts for the carrot-topped teen, with Mark Waid introducing readers to the key players from Riverdale in a new ongoing series, injecting a healthy dose of humour, light-hearted drama, and some real emotional stakes to hook the newer crowd. Waid’s writing is helped along by some absolutely dynamite art by Fiona Staples of Saga fame (you are reading that, right?!), who applies her astronomical talents to make Archie and the gang pop off the page.

The first issue starts in medias res, with Archie himself breaking the fourth wall to fill readers in on the latest drama — namely, that he and his sweetie, Betty Cooper, have broken up. We don’t learn what happened to tear the two apart — only that it’s referred to in hushed whispers as “The Lipstick Incident.” The stage is set for an elaborate scheme on the part of the other students to get them back together — unless the perennial feaster Jughead has anything to say about it.

For somebody like myself who grew up on ratty old Archie comics found at garage sales, Archie #1 is a fantastic way to reconnect with Archie and his pals. It’s more of an adult take, to be sure, but there’s a lot of fun to be had in the pages of this first issue. And with Waid foreshadowing the arrival of a certain brunette to Riverdale, I’m more than confident the momentum will carry forward.

Godzilla in Hell #1 marks the start of a new miniseries by longtime Godzilla writer and artist James Stokoe (track down Godzilla: Half-Century War if you can), and sees the renowned kaiju (Japanese for “monster”) literally falling into Hell, unaware of how he got there — or how to get out.

The comic is entirely dialogue-free (Godzilla’s never been much for words, anyway), with Stokoe’s art telling the story; visual clues provide some context to what’s going on, but it’s largely up to our interpretation. Godzilla’s sudden arrival kicks up a cloud of dust which spells out the word ‘lust’ — the first of the seven deadly sins, and as he goes on his journey, he encounters a swarm of not locusts but people, and a surreal landscape of nuclear silos inhabited by Cronenberg-esque monsters. Is it a commentary on mankind’s lust for power? Who knows! But it sure looks cool.

The remainder of the issue has Godzilla encounter a mysterious doppelganger that reveals itself to be a multi-limbed and -mouthed aberration; classic kaiju action ensues as the two beasts collide in a spectacular melee suited for any Godzilla film. Stokoe’s art is the real champ here, with colours, layout, and artwork working together to weave an exciting narrative without the use of dialogue.

Godzilla in Hell will ultimately run for four more issues, with different artists taking on the King of the Monsters each time, and while I can’t say it has mass appeal like Archie, it’s a rewarding read for the kaiju fans out there.