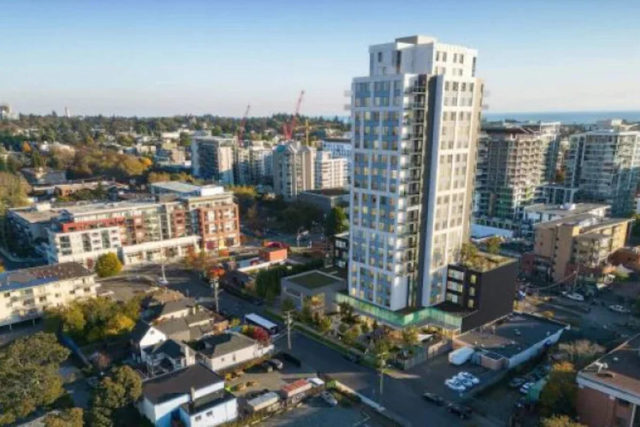 A rendering of the proposed housing development in the 900-block of Pandora Avenue. Courtesy of the City of Victoria Development Tracker.

Housing is a basic human need, and it should be easily accessible. Yet, in a report by the Government of British Columbia, it is estimated that a total of 23 000 people in the province experienced some form of houselessness in 2019.

Wherever you look, there are people throwing blame in all different directions. Many point their finger at foreign investors in the market, snatching up properties for financial gain. Others blame it on money laundering schemes and dirty investors, and some blame the government, claiming that ‘red tape,’ such as restrictions on building height and zoning of properties for single-family homes, stifles growth, leading to a shortage in houses themselves.

There isn’t one singular reason for the housing crisis in B.C., and in fact, it is likely a combination of all these reasons. However, one underlying component won’t seem to go away no matter how you approach this issue: the problem of profit.

Historically, human rights and profit motivations have not mixed. However, according to Statistics Canada, the real estate business saw an average 32.5 per cent profit margin in 2020, making it an increasingly profitable industry.

The market can be a good thing! It is excellent at creating competition and promoting innovation, allowing us as consumers to benefit from the latest and greatest new product. However, the free market is driven by scarcity (whether or not this scarcity is real or imagined is a topic for another day), and where there is scarcity, there will always be someone who tries to use it to their advantage.

Considering that we have put our trust in a system not designed to provide an equitable housing supply, one thing is abundantly clear: housing and the free market do not mix. Housing is or at least should be, a human right. This means we have to reconcile with the fact that allowing the free market to control housing will ultimately lead to inequities within the system, as we have seen very clearly happening in B.C. over the past few years.

While this view is often immediately attacked as communist propaganda, it doesn’t change the fact that social housing models have worked in other places worldwide. For example, social housing is a much more accepted term in places like Vienna, with approximately half of residents living in subsidized housing. The people of Vienna have decided that housing should be a human right and therefore have put policies in place to protect it from the free market.

The concept of non-market housing is not new to Canada. The government used to fund affordable housing projects. In the 70s and 80s, the federal government and most provinces helped fund affordable housing, including non-profit and cooperative housing. However, in the 1990s, federal funding was cut dramatically. In a funny coincidence, around the same time, Canadian home prices began to increase. At the beginning of 2022, the benchmark price of a detached home in Greater Vancouver was over eight times what it was in 2000.

When looking at it from this statistical context, it is not surprising that there is an affordable housing crisis. Calling for an end to all for-profit market housing is certainly not the answer; however, it is time to accept that the current system needs to be more balanced. On this front, there is both good news and bad news.

The good news: we know what needs to be done, and we have the capacity to do it. Funding more non-market housing projects has been done in the past and can be achieved again.

The bad news: public stigma around this type of housing and challenging regulatory barriers have made it much harder to get these policies the support they need. We need to refocus the conversation and make it clear to the government that the solution to the housing crisis lies within the system’s restructuring.

It is time to stop tiptoeing around the affordability issue. It is not just that people do not have enough money to afford housing; it is not just a lack of houses. The problem lies in the failure to acknowledge that the system cannot provide affordable housing. The only way to correct this problem is to implement policy changes that will allow for the incentivization and promotion of more non-market housing. We must actively shift the conversation away from the simplistic idea of “just building more houses” and embrace the full social dimension of the crisis.