Right now in Canada, an estimated four million Canadians are suffering from food insecurity — inadequate or insecure access to food caused by financial constraints. This condition affects approximately one out of every eight households. But what should be a pressing concern for this country is being largely overlooked as the Trudeau government is more focused on legalizing marijuana rather than sustainable food policy. 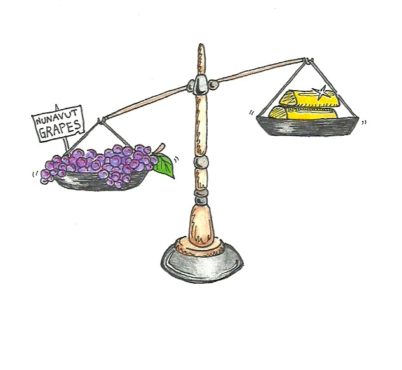 By contrast, 44.2 per cent of Inuit households in Nunatsiavut, 46 per cent in the Inuvialuit Settlement Region, and 70.2 per cent in Nunavut experience food insecurity. Part of the problem of food insecurity in these communities is due to the fact that people have to pay ridiculous amounts of money for basic food necessities. For example, in Iqaluit, the capital of Nunavut, grapes are around $28 a bunch and a box of pasta is $15.

Lacking access to a survival necessity plays a large part in the health of Indigenous people living in the North, and the negative physical, mental, and social health effects cost the healthcare system considerably. Individuals dealing with food insecurity, both adults and children, are proven to have poorer health. Adults become more vulnerable to chronic conditions, and the potential for these illnesses increases with the severity of their food insecurity. “Exposure to severe food insecurity leaves an indelible mark on children’s wellbeing,” reads research from the University of Toronto, “manifesting in greater risks for conditions like asthma, depression, and suicidal ideation in adolescence and early adulthood.” Populations with food insecurity may also forego critical expenses like medication because of the scarce resources for food.

After Canada’s 150 years of confederation, the government is only now working on a solution: the National Food Policy (NFP). The NFP will be a good start to creating equality through food needs by developing equal food prices, promoting support for locally grown products, and ensuring every Canadian has access to healthy food. By having a National Food Policy put in place, the government could subside the cost of food transportation, lowering the cost of food in Northern Canada and providing the citizens of Northern Canada with more of an opportunity for them to afford to eat.

Indigenous communities are also taking it upon themselves to solve the problem. Communities like the Garden Hill First Nation are returning to traditional farming practices, addressing local needs with collaborative decision-making to create effective policies and programs. In 2015, a non-profit group called AKI Energy secured a $300 000 grant to establish Meechim Market, growing chickens and vegetables to replace the sugary drinks and food that were contributing to the community’s high diabetes rate.

These programs are encouraging, but the government needs to pull its weight. We need to cultivate new approaches to leadership, bring respectful and culturally appropriate programs, and develop a National Food Policy to allocate resources and food products to Indigenous families and individuals that are unable to provide for their dietary needs.

Food security in Canada is not impossible, but with the way our country is being governed, it will never be achieved. With so many people malnourished, the issues of poverty and food insecurity among Indigenous communities in Northern Canada will be the death of our country. Canada has the capacity and knowledge to address the critical issue of food insecurity experienced disproportionately by northern Indigenous people. There are clear opportunities for achieving food security and food sovereignty by using knowledge, experiences, and policies. If the National Food Policy is implemented, we can create sustainable and dignified solutions to the long-standing complex challenge of food insecurity among Indigenous peoples in the North. Canada will not be the empowered nation it desires to be, unless ALL people have access to food. Food security is not a privilege; it is a basic right for all Canadians.