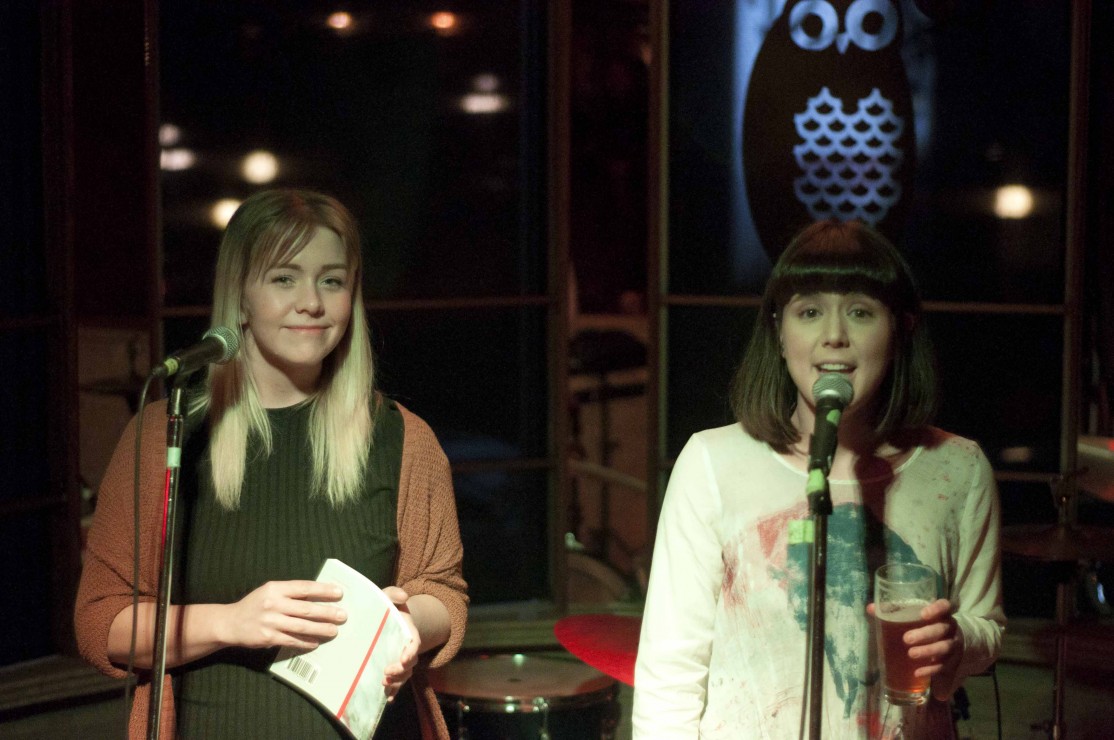 From left to right: This Side of West Managing Editor Stephanie Toth and Editor-in-Chief Keiko Hart. Photo by Spencer Pickles

Writing is a solitary art — as a writer, I know that we, by nature, are shy, introverted creatures, often appearing only at night and very rarely in groups of more than three.

But if there’s one thing that This Side of West knows, it’s that great things happen when you give writers a space to unite.

On Friday, April 8, This Side of West, the undergraduate literary journal of the Writing Department Course Union at UVic, celebrated the launch of its 14th annual issue with readings and live music at the Copper Owl.

The journal, which publishes poetry, fiction, creative nonfiction, and drama, is one of the few avenues at UVic that can connect writers across the boundaries of genre. Stephanie Toth, the managing editor of the journal, recognizes how important that is.

“Once you get to second and third year [of creative writing at UVic] you’re pretty split up,” says Toth, also a Creative Writing major specializing in poetry and creative non-fiction. “So This Side of West is great because . . . I get to meet people who are doing fiction, and drama, and it’s great because I wouldn’t otherwise . . . it gives everyone a venue to mix.”

And mix people did, with writers and non-writers alike mingling throughout the evening, which featured several readings from the writers published in the journal, as well as performances from local bands Cathedral Bloom and Christmas Jeans.

Cara Marks, a fourth-year writing student currently specializing in creative non-fiction, says journals like This Side of West are extremely important for aspiring writers.

“It’s really huge to have an audience. It’s not super easy to get published online, but easier than a lot of the literary magazines in Canada,” says Marks. “So to have your name in print is pretty cool.”

Marks, one of several featured authors whose respective works elicited whimsy and poignancy in equal measure, read an excerpt from her piece “Fervorously Embodied”, a witty but touching piece on love, life, and cashmere sweaters. The intimate nature of the venue meant that the works, many of them deeply personal, found an audience that could truly connect to what was being read.

The quality of the works published in the journal belie the relative lack of experience from the writers, but, as Editor-in-Chief Keiko Hart explains, that won’t be a surprise to anyone who knows about the Creative Writing program at UVic.

“I think anyone in the [Creative] Writing course union should know, too — there are so many talented people,” Hart says. “[There are people] who are more just really shy, and tentative about releasing their work everywhere, and don’t necessarily want to submit things . . . [but] there’s so many writers that are amazing.”

Marks agrees. When I ask her who her favourite authors from the journal are, she eagerly rattles off names like Rachel Lesosky, Leone Brander, and Susie Winters (“Among others!” Marks clarifies) as writers whose quality is particularly impressive.

For those students, and the others published in the journal, Toth calls This Side of West a great opportunity to see their work in print.

And though it may be a first publication for many of the writers, the quality on show at the launch means it likely won’t be their the last.