Knife Party at Hotel Europa is a sensory reading experience

Hopping from Canada to Italy and back again, Mark Anthony Jarman’s Knife Party at Hotel Europa darts from place-to-place, moment-to-moment, and observation-to-observation in a collection of poignantly linked stories that blur the lines between fiction, poetry, and nonfiction, not only in their language, but also in style and content.

Told almost entirely from the perspective of a nameless first-person narrator, Knife Party at Hotel Europa chronicles one man’s experiences with love, loss, lust, isolation, and intimacy as he travels, physically and mentally, between his home in Canada and his time abroad in Italy. The density and precision of the language imbues each story with a teeming world of detail, clearly illustrating the fullness of his narrator’s world, which is at once melancholic, nostalgic, and filled with wit and humour. 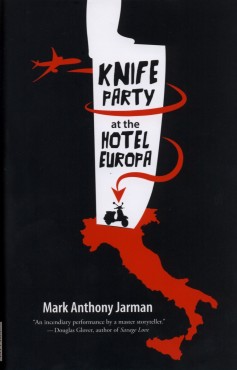 Jarman’s abundant experience in fiction, poetry, and travel writing has an evident and rewarding effect on the lush descriptions of both Italy and Canada, which immediately sparked my desire to travel. Each setting is given a flourish of exoticism, and every story provides an entire sensory experience. From the visual descriptions of gypsies and marketplaces to the textured accounts of different foods and sounds, the writing is thick with poetic language and metaphor.

Though previously published in various Canadian literary journals including Prairie Fire, Prism International, Descant, and The New Quarterly, I found it difficult to imagine these stories standing alone, particularly the first four, which spring off each other much like chapters in an experimental novel. Later stories gain more independence, but still call back to characters, places, and themes established in previous stories.

Some of my personal favourites in the collection include “The Petrified Florist,” a micro-fictive story which is unique from the rest of the collection in its narration, and “Pompeii Über Alles,” which has a more prominent and engaging plot than some of the other stories, while maintaining a stunning grasp of language and fluidity of narration. “Hallway Snowstorm,” which has a stronger focus on the Canadian setting, and “The Troubled English Bride,” which was shortlisted for the CBC Short Story Prize and won SubTerrain’s Lush Triumphant creative non-fiction contest.

Jarman’s stylistic use of the English language is by far one of the most inspiring qualities of this collection; however, it does not make for idle reading. Every one of Jarman’s stories demands the reader’s full engagement. For this reason, Knife Party at Hotel Europa may be better suited for readers who are accustomed to the mentally demanding and free-associative nature of literary fiction. Though plot is still a relevant and compelling component in these stories, readers who prioritize plot or clear-cut character development and action may be put off by Jarman’s style.

Though certainly not the most accessible short story collection, Knife Party at Hotel Europa is an absolutely fascinating glimpse into the ethereal realm of literary short fiction, full of staggering lyricism and emotional depth. Any aspiring writer or avid reader would benefit from some time alone with Jarman’s work.