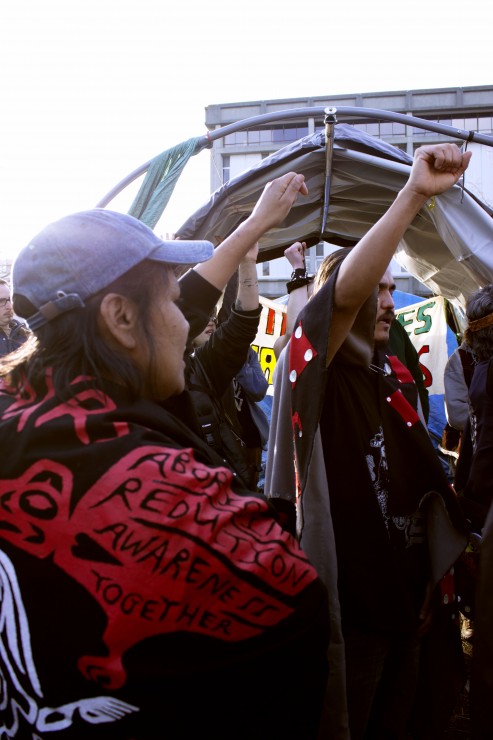 Super InTent City residents raise their fists in solidarity and protest of the government’s eviction notice. Photo by Sarah Lazin, 2016

I am getting so fed up with hearing the anti-homeless and poor-bashing rhetoric both in the news and from people writing hateful opinion pieces in local newspapers. Why do people in Victoria have such horrible things to say about poor and homeless folks? People seem to think that because they have a roof over their head and more money in their bank account, they must be better than the people who don’t. And that’s a real shame.

There are many factors that affect homelessness. Lack of affordable housing, inadequate disability compensation, stagnating wages, lack of support for Indigenous people after decades of colonialism, poor access to harm reduction services, and weak social safety nets are just a few of the systemic factors that contribute to the high rate of poverty and homelessness in our province, and Victoria is no exception.

Instead of blaming individuals for the system’s failures, how about educating ourselves and challenging the systemic issues contributing to homelessness? Neoliberal capitalism is a system that works very well for the white upper classes of society, and it relies on people being complacent and blaming marginalized individuals for its failures.

Make no mistakes: given different circumstances, it could be you or me asking for money on the street or living in a tent city. So let’s try to be a little more compassionate towards the people who have less, shall we?