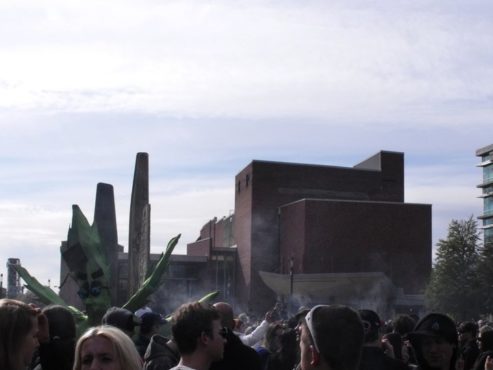 Victory, victory! Oct.17 is a victory. Certainly. Years of incarcerations, crackdowns, deaths, the drug war on Cannabis. The pendulum has finally swung towards good. 420, Cheech and Chong, and “THC cures cancer” have won out over Reefer Madness, ‘devil’s lettuce,’ and Nixon. Cannabis is legal, and that is that.

My relationship with weed began in high school. After smoking my first blunt, I bought a vaporizer and some bud from a nearby dealer. As an outcast, shy and perpetually stuck in the same social circles, weed was my out. I used the drug to make new friends, and to ease the anxiety of my first romantic encounters. In university, I restricted smoking to weekends, but those weekends were sometimes three or four days long. From the moment I would light up to the moment I passed out, I was perpetually using, always chasing a higher high. It felt good. It felt great. If you haven’t mixed booze and weed — crossfading — there’s nothing much closer to physical bliss. On weekends with my ex, I would take small doses of edibles in secret, giving me a cloud to ride on during sex, or tv, or breakups. I used weed. I was addicted to weed.

But just like any drug, [cannabis] can be abused. I abused it.

I was a good kid. I was bored and I was lonely, but my parents gave me enough hugs. Unfortunately, they couldn’t help me with smoking. I couldn’t help me with smoking. Only when another ex told me that I became a different person when high — dumb and vicious were their exact words — did I think about quitting; only then, sitting on my bed with my wild hair and blank red eyes did I start to think about stopping.

Realizing in those first few months the kind of power that this drug had over me was the most sobering part of sobriety.

Since then, it’s been ups and downs — always. Just this summer, I almost got in a fistfight in Berlin’s Gorlitzer Park with a dealer who had dealt me bad hash. Back in my home town, I heard voices during a particularly potent dab pen relapse, and later that week, I found myself stoned at a party, being threatened by someone wielding a knife.

I hope that legalization brings amnesty for all of us who would have been imprisoned under a more unenlightened government.

This is my cautionary tale and my point, if there is any point at the end of an addiction: marijuana is a drug. I know it is because it works. Weed numbs you. It makes anything funny, even pain, and it makes those calorie-dense cheetos oh so delicious. Like any drug, it has its uses — like a tincture of THC reducing the seizures of a nine-year old girl in Oregon, or joints of Green Crack helping my uncle during his painful struggle with pancreatic cancer.

But just like any drug, it can be abused. I abused it.

But I’ll be down there with you at the legislature. I’ll be there, trying not to smoke the joint that will very likely be in my hand. I will try to come to terms with this new Canada, this newly legal, accessible drug, this new world that we are forging.

Will a joint hold the same gravity as a shot of whiskey? Will it hold less? Will our country be full of lazy Jesse Pinkmans? Or will our kids finally be the generation, as Reagan once said, “that has no crutch?”

I hope that legalization brings amnesty for all of us who would have been imprisoned under a more unenlightened government. I hope that it brings freedom from pain for people crushed under the foot of opioids, and that it will prevent ten year olds from taking their first puff.

Legalization is the only way to a more responsible age of cannabis usage.