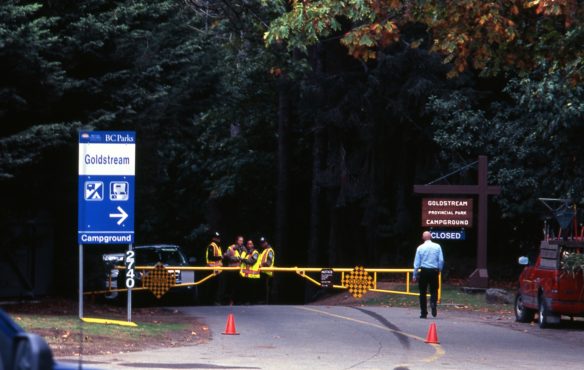 Some members of this community are retirees, divorcees, or people with disabilities; others are victims of reno-viction and flawed housing policies; a few suffer from addiction. One thing these individuals have in common — with each other and with ourselves — is their desire for community. Another is that they are homeless.

On the day of eviction, fences were erected surrounding the area of Regina Park and police stood by. Some campers fled the scene, fearing for their safety. Others had a short time to gather what they could before the site was taken over by police.

On Sept. 14, after marching in protest of displacement to a piece of provincial property at Ravine Way and Carey Road near Uptown mall, the campers’ sense of community became more important than ever. On Sept. 15, the community proclaimed themselves an urban reserve, and they took the name Namegans Nation. The campers must have known they would need each other for the fight ahead.

Less than a week later, Namegans Nation were issued a notice informing them that they would once again be evicted. Just as before, they were surrounded and forced to leave, and so they fled to Langford where they sought refuge in a local campground. There, in Goldstream Provincial Park, they found a home — temporarily. On Oct. 2, they were expected to disperse yet again. Both the B.C. Ministry of Municipal Affairs and Housing and Pacifica Housing have stated their intention to find shelter beds and other housing options for the campers.

The continued relocation of these individuals is a decision made mostly by people who have never stepped foot in a tent city. They have never seen the faces or heard the stories of the people who live inside these tents. Without knowing or understanding the issues, the NDP, the Ministry of Transportation, the Ministry of Environment, and the Ministry of Housing are making decisions that will spell life or death for many of these people.

Marilou Gagnon is a registered nurse, PhD, and Associate Professor at UVic, and she has taken the time to get to know these campers’ stories. As a nurse, Gagnon is experienced in the treatment of, and advocacy for, at-risk people. She has spent many hours with the members of Namegans Nation, treating and supporting them both socially and politically throughout their struggle against displacement.

“Homeless people don’t get a day off,” Gagnon explained. “One day off means no food . . . no medication. Being homeless is a full-time job.”

Some may consider the idea of being without a home something like a vacation. If you’re not paying for a home, that must mean you don’t have a job and are free to do whatever you like. The truth is, being homeless is exactly the opposite. Each day is occupied with trying to find a way to get money for food and necessities, and the nights are spent in constant vigilance, keeping watch to make sure you and your few worldly possessions are safe. Sleep is minimal.

This kind of constant stress can exacerbate existing physical and mental illnesses and can cause debilitating mental and physical strain even on those who are healthy. It’s a difficult reality that homelessness is a downward spiral.

The longer you’re homeless, the harder it becomes to recover from it. The constant barriers faced can be insurmountable, and without a community of support, many of these barriers can result in death. For some of Victoria’s homeless population, Namegans Nation provides that community.

The image of fear that has been cast around the camp by under-researched news reports — as well as the government’s unnecessary closure of Goldstream Park while Namegans Nation was located there — has created a smoke screen around the real issues faced by these individuals. Fear has led to rage in Langford and West Shore residents, and the camp has been met with angry neighbours and words of bigotry, racism, and ignorance.

If we ourselves are not affected by low income, lack of affordable housing, or disabling mental illness, we know someone who is.

The provincial government has done nothing to clear the smoke and repair relations between the general public and the campers. Instead, they have poured fuel on the fire and have greatly contributed to a social climate that culminates in the discrimination of homeless populations. It’s important to see past the government’s anti-homeless propaganda so that we can learn the human stories beneath.

We are all incredibly close to poverty. If we ourselves are not affected by low income, lack of affordable housing, or disabling mental illness, we know someone who is. Fear is not the way to handle a complex issue like homelessness. Instead, it is important to try and ease fear by getting to know the people affected by these challenges and the difficulties they face. Here at UVic, students likely understand the psychological and physical impacts a lack of affordable housing can have. In some cases, students are even affected to the point of homelessness. There are students living in their cars, and others who struggle to eat even once a day. Homelessness is much closer than we think.

These problems are not the problems of the other — they are our problems, and they are getting worse. It is our job — as the citizens who are set to inherit the social problems of the previous generation — to find a way to prioritize community, health, and safety. We must create a strong, united community that puts an end to the stigmas that prevent us from supporting those individuals who need it most. As Gagnon puts it, we need to “rethink the playbook of activism.” We must use our shared experience to create a better future for all of us.