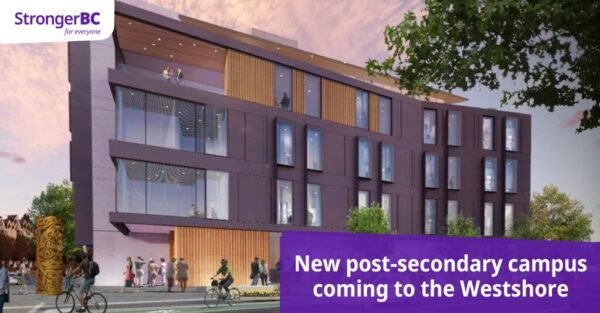 Architectural image sourced from Province of British Columbia on Flickr.

UVic has announced its collaboration with Royal Roads University and Camosun College in a new campus set to open in 2024 in the West Shore area of Langford.

UVic’s contributions to the project include $1 million of funding, as well as first and second year courses that align with the main UVic campus to help bridge students from one campus to another.

The opening of the West Shore campus is expected to be primarily beneficial to students in the Langford area who have previously had to commute a long way in order to access post-secondary options. UVic plans on allowing for students in the Langford area to have an easier transition into getting their degrees at UVic by offering first and second year courses at the West Shore campus.

“Our intention is to provide students with additional options, and to create more pathways to post-secondary education for West Shore learners,” says Dr. Elizabeth Croft, UVic’s vice-president academic and provost. “Degree programming at the West Shore campus will complement our existing programming at the main campus.”

This partnership will also grant students more opportunities to take courses at Camosun College and Royal Roads University and eventually transfer to UVic for the upper-year portion of their degree. An aspect that will be helpful because UVic and Camosun College already have the biggest learning pathway in B.C., with over 1 500 transferring over to UVic from Camosun every year, according to Croft.

Connor Hogan, a student at Belmont High School, is quoted in the government press release as explaining, “As a high school student in Langford, we’re faced with quite a long commute if we want to go to school at UVic or at Camosun, and that can really affect our decision with what school we go to. When this new campus opens up, it will definitely help open some doors for us to study where we are, close to home.”

Although the opening of the new UVic campus is going to impact the post-secondary options of prospective students who live in Langford, students who currently attend UVic’s main campus should have nothing to worry about in terms of changes happening to the main campus.

UVic plans to start off by offering core courses in the humanities, social sciences, fine arts, as well as courses in computer science and software engineering at the West Shore Campus, while providing the same courses at the main campus, which will provide students the option to take courses at either campus.

In terms of this new project that UVic is heading, there are also questions on how this new campus option will impact the already persistent student housing issue at UVic.

As it stands now, UVic has no current plans in building additional residences near the West Shore campus for students that may choose to attend their first two years there. But, according to Croft the West Shore property has room for expansion if there is later a desire for it.

As Croft says, for now, “the intention is really to reach and make post-secondary education more accessible for learners already living in West Shore communities.”