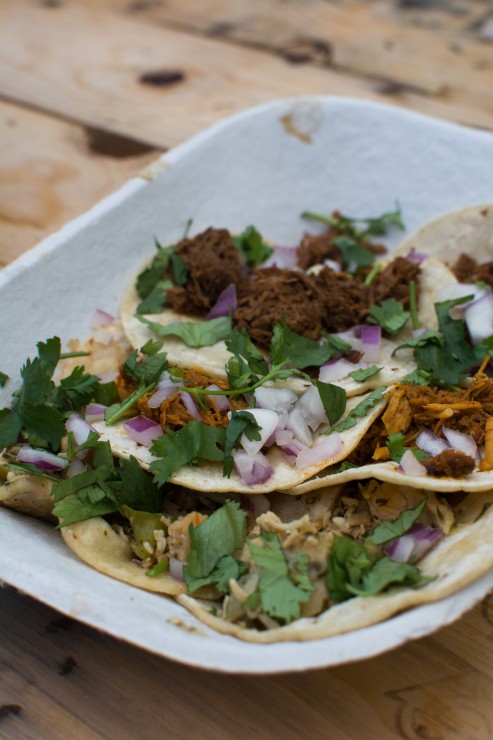 Burgers, jambalaya, pulled pork and tacos have come to roost in the Royal BC Museum’s rear courtyard until October for the Victoria Food Truck Festival. With six different food trucks and one refreshment booth serving craft beer and wine, this is a one-stop shop with something for everyone if you’re downtown and hungry for a quick snack. Check out the contenders.

From the wacky purple beets on the side of the truck to the big smiles that greet you at the window, Deadbeetz is all about having a good time. As the name and the décor suggest, this truck is known for its inventive use of beets; their signature dish is the Beatrice Burger which comes topped with pickled beets and their own Vancouver Island sauce. With its bright colours and exciting flavours, this truck is a fun place to grab a bite.

Love Pig at Johnson and Blanshard? Stop in at their food truck which has been cruising local festivals and events for the past three years. Featuring a truncated menu of Pig’s finest, this food truck is dedicated to authentic BBQ done quickly — and done well — with a long history of pulling fine pork. Their most popular dish is the pulled pork poutine.

Jambalaya, Po-boys, and beans and rice are just a few delights offered on this menu. A Streetcar Named New Orleans is not only a quippy homage to Tennessee Williams’ play, but also makes reference the Streetcar Strike in 1929 where the Po-Boy sandwich was created. Local restaurants showed their support for striking transit employees by serving them “Poor Boy” sandwiches. Distinct unto itself, New Orleans cuisine is a blend of European, Caribbean, and African cookery. Chef Billy Rieger hails from New Orleans, and his truck presents a rare opportunity for an authentic taste of New Orleans that shouldn’t be missed.

Built upon the traditional Mexican recipes of the Espinoza family, this food truck is one of the oldest in Victoria. When the Espinoza family first came from Puerto Vallarta, they disco-vered two things Victoria was lacking: food trucks and authentic Mexican cuisine. Five years later, their three food trucks are a busy sight, and they are still dedicated to serving their grand-mother’s traditional recipes. One of their most popular dishes is the fish tacos.

The sixties are back with the only tie-dye truck in town. The Love Perogy has been serving up burgers and perogies in the Colwood area for the past four years.  They are the home-on-wheels of highly rated burgers which often feature something called a “cheese skirt.” Topping a patty with a skirt allows the grated cheese to fan out around the burger and crisp on the grill.

This truck may not dazzle you with a lengthy menu, but it knows how to treat sockeye salmon.  Now in its second year, this truck only offers two dishes: a grilled salmon burger and a salmon salad, but in this case, simplicity means quality. Featuring fresh, local ingredients, Wild West BBQ Salmon is a seasonal venue open only in the summer months.