Senate and Board of Governor candidates forum fails to draw audience 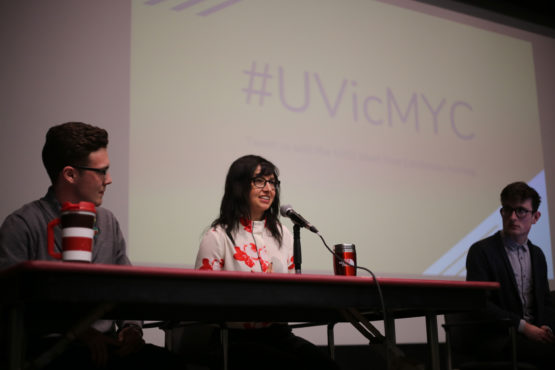 Andrea Mellor, graduate student candidate for Board of Governors and Senate, speaks at the recent forum. Photo by Belle White, Photo Editor

If students had come to the Senate, Board of Governors, and Referenda forum held Feb. 26 at Cinecenta, they would have heard some strong words regarding university governance and institutional reform.

Whether it was on Indigenizing UVic’s faculty and administration, making textbooks affordable, or the issue of UVic administration divesting from fossil fuels, Senate and BoG candidates had strong opinions to share. Also present at the forum were referenda proponents, who spoke in favour of the three questions being voted on by UVSS students later this week.

But each speech and talking point was directed towards a nearly-empty Cinecenta theatre. Only two dozen or so students were in attendance, and nearly half of them were there to campaign.

Even attendance among candidates was disappointing. Five of six Board of Governors candidates were present, but only eight out of the 14 Senate candidates showed up to speak.

“I think it’s really important that the UVic elections website is a little bit more accessible,”  said Lee. “Let’s post on the [UVic Facebook] meme page about it. Let’s create some Senate memes!”

The event was less of a debate and more of a forum, with candidates presenting their own platforms without much argument. The only disagreement of note was between Cameron Leckenby and Pierre-Paul Angelblazer, two undergraduate candidates for the Board of Governors.

Angelblazer, a current student senator, was asked by the moderators about his absence at each of this year’s Senate meetings. Asked for the reason for his truancy and if this would change if he was elected to the Board of Governors, Angelblazer responded that while he regretted missing the Senate meetings-proper for other meetings (like hiring committees), he was still putting work into the institution as a whole.

“I’ve been to most of the senate subcommittee meetings, which is where all the nitty-gritty of the policy happens,” he said. “With a much smaller Board [of Governors], I’d assume they’d be much more in tune with the scheduling, so it works with everybody’s schedules.” 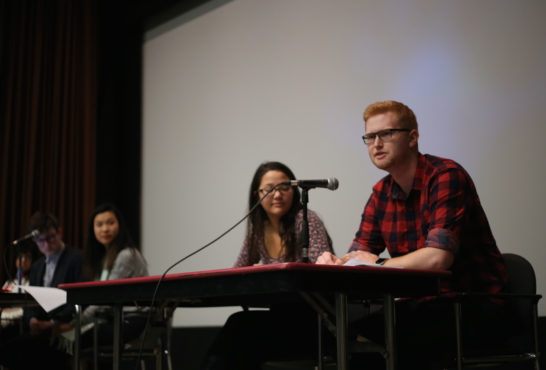 The UVic Senate website lists Angelblazer as present on one Senate subcommittee — the Learning and Teaching subcommittee, which met once in the fall 2017 term. There are 12 subcommittees in total.

Leckenby challenged Angelblazer, asking him how he will prioritize his Board of Governors duties with other administrative duties if he is elected as UVSS Director of Outreach and University Relations.

“You really have to do this case by case,” Angelblazer responded. “But I’ll make the best decision for students.”

“The job market is really seriously competitive, so we need as much support as possible in these university years to propel us forward,” says Mellor. She also noted that if elected, she would be unafraid to call the Board of Governors to task.

“I think what the board has been good at is trying to move back towards seeming like they’re listening to students,” Cantarutti said. “There’s an opportunity there to engage [the administration] with a fresh new energy.”

Most of the Senate candidates stayed on topics discussed in their printed platforms, even though many of those topics were not directly related to matters under the purview of the Senate.

Issues like divestment, student housing, and campus meal plans, for instance, were all discussed by Senate candidates. However, the Senate deals with academic concerns, and as such has no direct control over any of those matters.

One pertinent issue was the price of textbooks — a topic that Nathan Daisley discussed with veracity. Daisley promised to lobby for a more extensive investment in open-source textbooks, a cause currently being advocated for by the UVSS through their TextbookBroke campaign.

“We’re really just trying to save everyone money where we can,” said Daisley, whose speech about saving money on textbooks was perhaps the most genuinely passionate address of the afternoon. “The university just does everything it can to steal from us, so I want to work on that for you guys.” 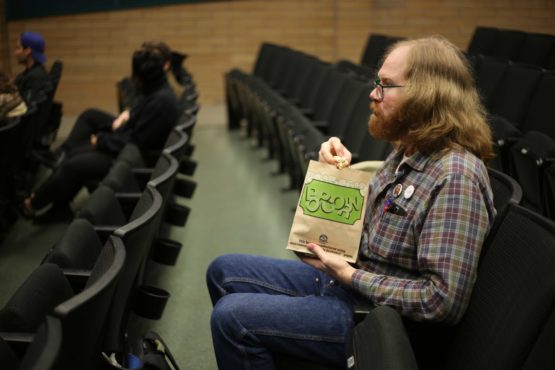 Many of those in the audience were connected to the election in some way, like Dirk Slot, candidate for UVSS Director of Student Affairs. Photo by Belle White, Photo Editor

Finally, many of the questions were concerned with engagement. Senate candidate Jordan Gilson floated the idea of town halls designed to keep students in touch with their student senators. When asked if students were likely to show up to a town hall considering attendance at meetings like the UVSS Annual General Meeting is so low, Gilson admitted that such a meeting was “an ideal,” but said it was still worth pushing for.

Senate candidate Isabella Lee was perhaps the most engaging undergraduate candidate on stage, and she added a unique idea for increasing student engagement to the discussion.

Curtis Whittla, another Senate candidate, spoke about advertising the Senate in spaces already occupied by students: namely, the internet. Lee took his answer to the next logical conclusion — Facebook meme pages.

“I think it’s really important that the UVic elections website is a little bit more accessible,”  said Lee. “Let’s post on the [UVic Facebook] meme page about it. Let’s create some Senate memes!”

This article has been edited to correct the spelling of Brent Cantarutti’s name. We sincerely regret the error.