Shouldn’t we all stand up (or kneel) for what we believe in? 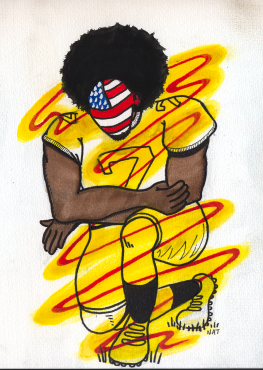 With nine simple words, the world’s largest sports apparel company has taken the moral high ground on issues larger than sport, angering some investors and millions of consumers worldwide.

“Believe in something. Even if it means sacrificing everything,” reads the now famous Nike advertisement, written in bold white letters against a close-up headshot of current free agent quarterback and social rights activist Colin Kaepernick.

Looking for a spokesman for the 30th anniversary of their “Just Do It” campaign — an initiative started in 1988 targeting all Americans regardless of age or fitness level to inspire them to be physically active with motivational messages — the nearly $30-billion company decided Kaepernick would be the perfect fit.

Kaepernick, who started kneeling during the U.S. national anthem at football games in 2016 to protest police brutality and the shooting of multiple unarmed African-Americans, has been seen as a hero for some who support his movement, and as a villain for others who view him as a ‘traitor’ for what they see as disrespect towards the United States.

Once again, I find myself coming to the defense of those who are brave enough to stand up against injustice.

The quarterback signed an endorsement deal with Nike back in 2011, and although Kaepernick hasn’t played a game in the NFL since that 2016 season, Nike has continued to pay him, waiting for “the right time” to bring him back for advertising.

And the company couldn’t have picked a better time to bring Kaepernick into their marketing campaign: two days before the 2018 NFL season opener, Nike dropped another doozy, announcing they would run a two-minute commercial during the kickoff game featuring Kaepernick talking over montages of other sports stars defying the odds, and achieving greatness on and off the field.

In response to the ad, Nike’s shares initially fell by three per cent and some consumers recorded themselves burning their Nike apparel with hashtags such as #JustBurnIt and #BoycottNike, angry with Kaepernick being at the centre of the campaign.

It also drew a response from U.S. President Donald Trump, who hasn’t been shy with tweeting his displeasure against Kaepernick and other players who have protested during the anthem since the movement started last season.

“Just like the NFL, whose ratings have gone WAY DOWN, Nike is getting absolutely killed with anger and boycotts,” Trump wrote.

It’s inspiring to see a major corporation take the decision of standing behind the modern day civil rights movement started by Kaepernick.

Last year, as hundreds of NFL players followed Kaepernick’s lead after Trump called them ‘sons of bitches’ for disrespecting the flag during the anthem, I wrote a piece applauding those athletes who knelt. Once again, I find myself coming to the defense of those who are brave enough to stand up against injustice.

It’s inspiring to see a major corporation take the decision of standing behind the modern day civil rights movement started by Kaepernick.

Adults know that children look up to them as role models. Especially athletes. Shouldn’t we all stand up for what we believe in, and shouldn’t that be the message we want our role models to portray?

Surely Nike knew using Kaepernick as the headliner for their campaign would have consequences against their conservative-leaning investors and consumers, but they took a chance for what they thought was morally correct, and I think that should be praised.

Boxing legend Muhammad Ali was celebrated by social rights activists for refusing to join the American war effort in Vietnam after being drafted, while Arizona Cardinals safety Pat Tillman was praised by pro-military groups when he quit the NFL to serve in the army following the 9/11 terrorist attacks.

These are just two examples of athletes on opposite sides of the political spectrum who took  a stand for what they believed in.

Maybe if we had more athletes brave enough to be like Kaepernick, Tillman, or Ali, who stand (or kneel) for issues they think are more important than sports, and companies like Nike that are brave enough to back them up, the world would have more inspiring role models to look up to, rather than a racist and unpredictable political leader in a terrifying position of power.

Although their shares initially dropped in the wake of the campaign, Nike’s online sales have since shot up by 31 per cent. It goes to show that contrary to Trump’s scathing Twitter remarks, when you believe in something — “even if it means sacrificing everything” — the reward in the long run will be well worth the risk.