At the Calico Cat Teahouse in Nanaimo, diners can sample the usual fair of soup and sandwiches; however, if you want an extra experience, you can make a reservation to have your tealeaves read. 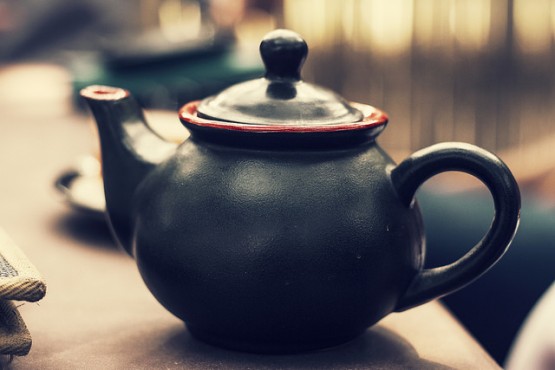 The teahouse itself is in a residential home, which has been converted and filled with tables and chairs to accommodate diners. My friend and I arrived a little early for our reservation and were greeted, brought to a table, and given a large pot of tea immediately with mismatched teacups. The tea tasted like a slightly weaker version of orange pekoe, and we were told that we could have as many cups of tea as we liked and didn’t have to stick to just one.

A short time later, after we were given a chance to look at the menu, our order was taken and we settled on the Afternoon Tea for Two at a cost of $36.50. The Afternoon Tea for Two was presented on a three-tier display with ample food for two people. The top tier held fruit, the second tier two different finger sandwiches, and the third tier dessert. The sandwiches were egg salad and tomatoes, with what seemed like a mixture of mayonnaise and cream cheese. The sandwiches were tasty as a portion of the meal, but they may be a little too rich tasting to eat as the main. Still-warm scones complete with jams and cream on the side were definitely the highlight of the meal.

I think I hold a healthy skepticism, so I made sure to avoid talking about anything personal while my friend and I ate and waited for tealeaf reader, Heather, to join our table. I worried that our conversation would be overheard. However, my friend and I agreed beforehand that we were doing this for fun, and I think that that attitude gave us a better chance to enjoy the experience.

We had each chosen 20-minute readings at a cost of $44 each; although, 10- and 30-minute readings are available. Heather asked us to turn our cups upside down and turn them clockwise three times. I went first, and what started off as me just hoping Heather wouldn’t see a Grim ended with me being spooked out by the reading itself. Heather pinpointed my personality with frightening accuracy, knew my taste in men to ridiculous detail and my feelings about my jobs. It felt like she had known me for years. As for future predictions, everything she predicted were things that I had been very interested in doing, but as of yet I don’t know how accurate those predictions are. My friend equally enjoyed her reading and said it was similarly accurate in a lot of ways. Although, Heather predicted that my friend would fall in love with a man, and as a lesbian, my friend found that to be off the mark.

Overall the experience was overwhelmingly positive. The readings started later than we had reserved and were a little shorter than the 20 minutes we chose, but I felt satisfied with the time we had. I will definitely be visiting the Calico Cat Tea House again in the future, and if you look at it as a fun experience rather than a guide to your life, it will easily satisfy your expectations.