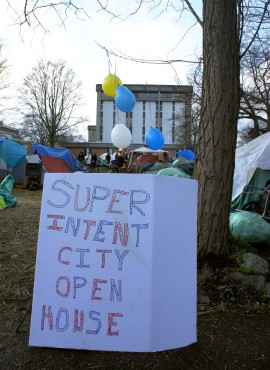 On Monday, Jan. 11, residents of the Victoria tent city — now known as Super InTent City — held a news conference in response to the government’s advisory stating that they find alternative shelter. Less than a week after the news conference took place, the City opened its doors as part of a larger open-house initiative in the hopes of lessening community unease surrounding the activist site.

What began as a tent or two on the grounds of the Victoria Courthouse back in August of 2015 has since grown to a community of at least 50 tents — though Christine Brett, our guide to the community during our visit, estimates it to be closer to 100, including those which have been joined together to form larger structures — with additional domicile structures sourced from scrap materials, and between 120 and 150 residents at any given time.

There’s a lot of ebb and flow, Brett told us; people come and go after staying for varying lengths of time.

Another member of the community mentioned donating a tent, but coming to stay only briefly while several friends occupied the space on a regular basis.

On Jan. 4, My Place Transitional Home, a part of Victoria’s ongoing commitment to respond to the plight of the city’s homeless, opened its doors to 40 tent city campers. The home provides new tents, sleeping bags, showers, daily meals, and access to outreach workers. However, less than half of the residents from Super InTent City will have immediate access to these resources, and many more would prefer to stay outside on their own terms, voicing their disdain for those in charge of the program and the capitalization of homelessness.

The continued existence of Super InTent City lies in a legal loophole: whereas encampments erected in city-owned parks must be taken apart and removed between 7 a.m. and 7 p.m., police and bylaw officers have no jurisdiction over the courthouse site, unless the owner (the province of B.C.) makes an official complaint. This has drawn concern from those municipal residents living across from the encampment: while the camp is bordered on three sides by Christ Church Cathedral, the Provincial court, and public service offices, the fourth side hosts two apartment complexes whose residents have complained of alleged petty thefts and home invasions.

Despite the residential rancor, the province has no current plans to have the campers removed, so the residents will continue to call Super InTent City home, at least for the time being.

For more of a glimpse into the Super Intent City, read our feature story, “Through the Looking Glass.”