The BC Ferries survival handbook 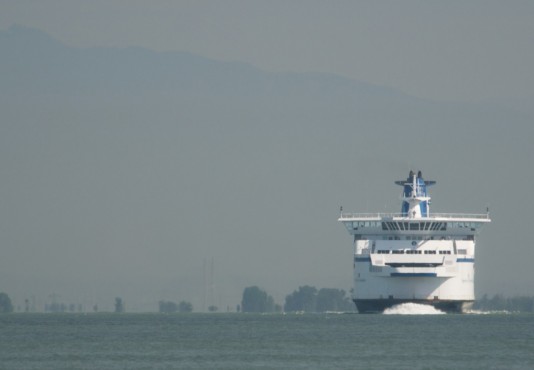 It’s that time of year again — students are soon to find themselves soliciting services from an organization that every Vancouver Island uncle refers to as “a damn state monopoly.” No one likes the trips made to and from the mainland, and people who didn’t grow up on the island are likely to find themselves even more bewildered about how one should operate themselves while in transit aboard one of the miracles of modern technology. Read on for the ultimate guide of tips, tricks, and knowledge about BC Ferries for those who need it.

Be sure to pack a disguise so you look young enough to buy a White Spot Pirate Pack — it comes with a chocolate coin. If you already are a child, great work! You can save money by not buying a disguise, and have the fun opportunity to perform a feat of arbitrage. Oh — wait — you’re a child. Arbitrage means “riskless profit”, and in this case, it refers to the fact that you can use your status as a child to purchase pirate packs for older and desperate students, charging them a small fee for your services!

Ask for a cup of water and fill it up with Sprite. Dishonest? Maybe. Clever? Definitely.

You need food, and the buffet has an all-you-can-eat policy! But you’re poor. So what now? I’ll tell you what now. First: go to the gift shop and trade your grandfather’s wedding ring for 16 wool scarves, then borrow some scissors from the gift shop cashier. They don’t like lending them out to just anyone, but they will if you cry. Now cut the scarves length-wise twice to form three strips out of each. You should now have 48 strips of wool. Tie them together and twist until the centre of your rope begins to knot itself into a thicker rope.

Take your rope and go to the deck above the buffet. Once on the deck overtop of the buffet tie it onto the water-facing handrail using a reef knot, or a clove hitch and an overhand knot (if you’re real nasty). Now wrap the business-end of that sheep-pube-bungee around your waist and jump, breaking through the glass of the buffet windows and startling the dining bourgeoisie. Apologize, and explain that you’ve misplaced your receipt from when you paid for your initial entry. Acting like you belong in the buffet will fool them, and with your clever explanation, they’ll respect your reasoning.

BC Ferries has this weird rule that says you can’t sleep or rest or practice your butchering on the lower vehicle decks while the ferry is in motion. Well I think that is ridiculous, and have discovered a very easy way of getting around it. Did you know that you can just buy coffins? They can even make them to order! Get yourself an extra large coffin at Arnie’s Discount Funerals, and stick it in the back of your truck! Arnie’s: putting the “fun” back in funeral since 2005. Now you have a hideaway with room for a mini-fridge, extra phone battery, and a portable toilet. Your corpse’s casket clubhouse even comes padded and soundproofed! Perfect for an hour-and-a-half ferry ride.

So let’s say, for instance, that you don’t have a car but you do have a coffin. Walk around the lower vehicle decks before they break out the Rottweilers and ask passers-by if they’ll help you transport your uncle’s body to the mainland. Hey, don’t be too nervous, it’s Canada! People are friendly. Once you’ve loaded up the coffin, sneak away momentarily and return to the coffin later to nap.

A scenario where you won’t be sleeping in a coffin

So you didn’t like the coffin idea. Okay, fine. Buy a pair of earplugs and sleep in the kids’ play area. Just be sure to set an alarm, otherwise you’ll be stuck in what ferry aficionados like to call a “round-trip”. They call it the same thing you would, stud.

Lose some quarters, and sometimes loonies!

By playing the oft-broken, always glitchy arcade games conveniently placed on the vessel to drain you of your funds, you’ll find that you now experience an intergenerational nostalgia whenever you hear the words “Blue warrior needs food . . . badly!” Be careful, though — that same warm tug at your heart will lead an all-out assault on your wallet. To avoid this trap set by the chief steward and their lackeys, only carry bills larger than $100, or in a non-American foreign currency. The staff will refuse to accept it and break it, and you will literally be unable to waste your funds.

Play games on your phone

Yes, I know that you’d be doing this already, but can you find an outlet for your phone? Exactly! Outlets on the ferry are everywhere, but they are also seven feet in the air—meaning that you’ll have to stand if you plan on being on your phone. That is, unless you had something to boost you up higher so that you can sit alongside the outlet. This is why you always want to bring a stepladder whenever you take the ferry.

Argue with powerless BC Ferries employees

We both know you’d do it anyways if you weren’t so gosh darn polite. So indulge a little, let your inner-soccer-mom voice come out and:

Berate the White Spot employees as to why they don’t accept debit cards.

Tweet @BCFerries and ask where they get the nerve to make you use your data instead of the crappy Wi-Fi they allegedly provide. #WeAllKnowItsDialUp

Question the logic of the crew member who won’t let you feed cigarettes to seagulls.

Request a meeting with the High Lord Chief Steward and make a case for the installation of a giant bridge connecting Vancouver Island to the Mainland. After all, it only took 10 years and some millions of dollars over budget to connect Victoria and Esquimalt!

Jump off the vessel, and when a rescue attempt is made by the ferry crew, insist that you are a transient orca and that they are interfering with your God-given right to migrate.