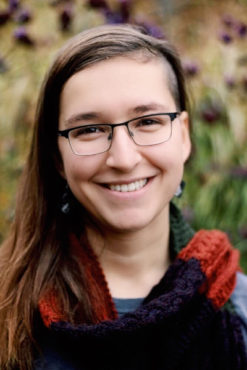 It’s not every day that a 21-year-old can say they’ve written a 127 000-word novel, ended a publishing contract won in a contest, and decided to self-publish instead to have more autonomy.

Today — Jan. 16 — UVic theatre student Miriam R. Dumitra is releasing her very first book for the world to read. She can say she’s done those things.

“My book is called Brightshade. It’s a young adult epic fantasy,” says Dumitra. “It’s most of what I read, so I figured that makes the most sense to write.”

Dumitra started writing her book about five years ago, and wrote three drafts before it was up to snuff.

“I won a contest which got me a publishing deal with a small press,” she says. “Through that publishing deal I worked with … FriesenPress for a couple months, and then eventually I realized I had the resources to finish off by myself and to self-publish.”

“It’s getting way more common. There’s kind of this stigma about it, like, ‘Oh, you’re self-publishing because you’re not good enough to go with a traditional publisher,'” she says. “[But] you have complete control of your book … [and] by self-publishing I am able to control all my edits.”

Plus, since it’s her first book, Dumitra expects to make more money this way.

“If you self-publish, you have more control of where you advertise and where you sell your books, and you get a higher percentage per book for the royalties.”

And this young author is aiming big in terms of where she wants to sell her books — she hopes that readers will soon be able to find her book in the Fantasy section of bookstores like Chapters.

“[My target demographic is] ages 16 to 24, women, [and] people who are familiar with the fantasy genre.”

Dumitra has read a lot of fantasy herself. When she was younger, her favourite young adult fantasy novels were the The Song of the Lioness series by Tamora Pierce, featuring the character Alanna of Trebond.

“The [Alanna] books are amazing,” she says. “The protagonists are all women who do kick-ass things, which is awesome, because as a girl I wasn’t used to reading female protagonists — I got all these male protagonists. So I got to see myself in those characters, which was awesome.” 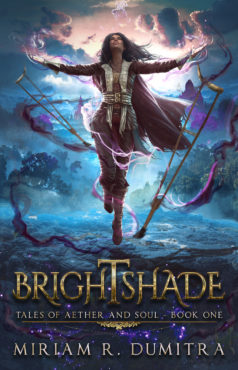 Books like these, with strong female leads, influenced Dumitra’s decisions regarding the target audience of her own novel.

“[My target demographic is] ages 16 to 24, women, [and] people who are familiar with the fantasy genre,” she says.

It shouldn’t come as a surprise that Dumitra’s book is filled with strong female characters, as she herself encompasses those qualities. She is, after all, a first-year theatre student who managed, on top of her studies, to write and publish a substantially-sized book.

“If I don’t feel like writing something, I try to find the … most interesting scene that I could possibly want to do and start with that,” she says, on the subject of motivation.

“If I haven’t written in a couple of days, I’ll write the scene that I’ve been dying to write this whole time — often those are action scenes, or a budding romance between two characters.”

Dumitra is strict with herself in other ways when it comes to writing.

“I can’t have noise around me when I write… I can’t even listen to classical music.”

And here’s the real zinger: she’s almost done the second book in the series. The series is called Tales of Aether and Soul.

“I wrote half of [the second novel] in one month,” she says. “There’s this really awesome challenge, it’s called NANOWRIMO — National Novel Writing Month. Basically it challenges you to write 50 000 words in November each year.”

“I did it for the first time this year, and I found that really worked for me. It makes you write every day, basically, because there’s no way you can reach that [goal] unless you … get in your daily word count.”

Dumitra has no plans on slowing down, either. This book, and the almost-completed second book, are two of four in the already planned-out series.

“With this series, I’ll stick to self-publishing,” she says. “But I’m planning on obviously [continuing to write], and after that I might query some agents and some traditional publishers.”

In spite of her boast-worthy work ethic and finished product, Dumitra comes off as equally unassuming and excited about what’s to come.

“It’s a little surreal that it’s actually happening. I’m trying to remember all the things I have to do. But yeah,” she says, breaking into a smile, “it’s awesome.”

You can find Brightshade by Miriam R. Dumitra as an e-book and paperback on Amazon. For more information, visit her website at www.miriamrdumitra.com and for today’s official online launch of her book, visit Dumitra’s author page on Facebook.