The chaos on roads created by snow is preventable 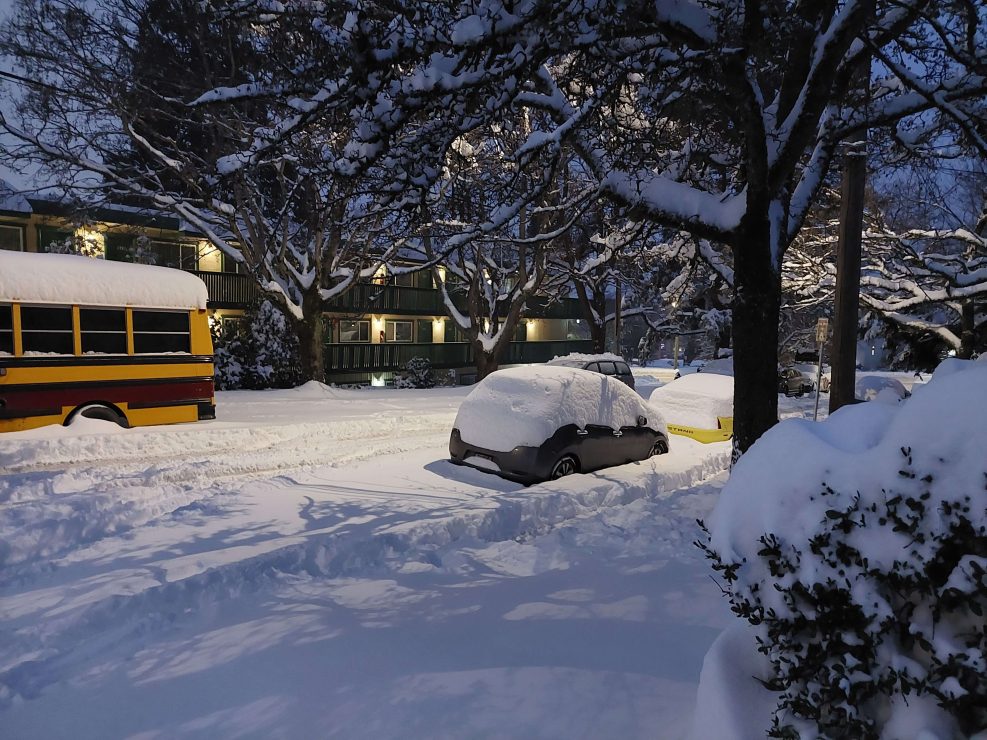 Apart from my university education, I moved to Victoria due to its mild winter climate. However, recent erratic winter weather patterns in southwestern B.C. has made multiple winter days in Victoria more extreme than clement.

Although evidence suggests that the world (on average) is becoming warmer, unusual winter weather such as polar vortexes, cold fronts, and arctic outflow warnings have become more common, especially in the Pacific Northwest. Therefore, as we are amidst climate change, municipalities within the Greater Vancouver and Victoria regions should reconceptualize their snow-clearing approach; one way to do that is by increasing their winter maintenance budget.

The annual snow removal budget for the City of Victoria for 2022 was a mere $430,000. As for the Municipality of Saanich, their winter 2021 maintenance budget was just $200,000. Last year, the Saanich council approved two new front-plow trucks for this winter season, but due to supply-chain issues, this plan never came to fruition.

This increase in winter equipment would have gone a long way in dealing with snow in Saanich. In a stretch of a few days this winter season, Greater Vancouver got at minimum, 25 centimetres of snow, whereas the Greater Victoria region experienced 30 centimetres of snow. Some regions in B.C. got more than twice the predicted snow.

According to a Vancouver Staff Report, the City of Vancouver’s annual Winter Weather Program budget is $5.4 million. On the other hand, Calgary spends about $40 million annually to deal with snow. With erratic winter weather patterns on the rise in Canada and the U.S., it is imperative that Vancouver and Victoria step up their game. They can learn a thing or two from Calgary.

Due to the unpredictability created by climate change, now is the time for municipalities in Greater Vancouver and Victoria to increase their winter maintenance budgets. Just to be clear, I am not necessarily saying for their winter budgets to be as much as Calgary (that would not make sense), but enough to efficiently deal with at least 30–50 centimetres of snow. If this approach is taken, there will be less havoc on roads in Victoria and Vancouver in the future.

Vancouver, Victoria, and Saanich all take a similar approach to snow-clearing. When faced with heavy snow, these municipalities prioritize main roads and neglect narrow residential streets. Towards the end of December, when snow blanketed the southwest region of B.C., these three jurisdictions followed this procedure. This resulted in multiple people, including myself, who live on narrow residential streets being stuck in their homes.

Around 8 a.m. on Dec. 22, I booked a taxi for 3 p.m. to the Clipper ferry terminal (Victoria to Seattle) in downtown Victoria. However, due to the sheer amount of snow in my neighbourhood at that time, my taxi never came. The taxi company, amidst all of the chaos created by the snow, cancelled my booking without informing me.

As I was desperately trying to get to the ferry terminal, I had no other choice but to take the only operating bus in my area, which, under normal circumstances, is a 10 minute walk away from my house. So, with two large bags, in almost knee-deep snow, I started my arduous journey to the bus stop.

When I was midway through my journey, at a distance I saw someone in a pickup truck helping cars that were stuck in snow. When he was done helping them, the good samaritan came towards me and offered me a ride to wherever I was going. As I was extremely desperate, I accepted the individual’s offer. Under normal circumstances, a car ride from my house to the ferry terminal takes 10–12 minutes. However, due to the snow, it took us more than 30 minutes.

I barely made it to the ferry terminal for my scheduled departure time. I can only imagine what it would have been like if I was unable to meet family members due to extraordinary weather.

If municipalities in the Greater Vancouver and Victoria regions were proactive, prudent, and sharp-witted, the havoc on the streets could have been prevented and people like me would not have to endure travel barriers created by snow. Climate change is not only a present phenomenon, it has been pervasive for multiple years now. Leaders of municipal jurisdictions in southwest B.C. should have clocked this fact about climate change by now.

It is a known fact that Vancouver and Victoria do not get the same amount of snow as Calgary and Edmonton. Hence, on the surface, a low winter maintenance budget makes sense. However, there is a confounding variable (climate change) that plays a vital role in the numerical amount of snow. Thus, an increase in winter maintenance budget is needed to put an end to the chaos on southwest B.C. roads. This way, mismanaged and disorganized snow-clearing plans in Vancouver and Victoria can be expunged.