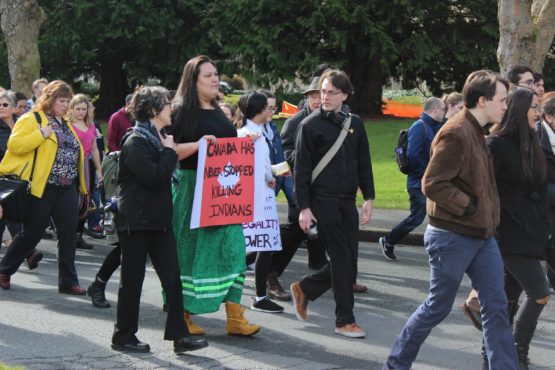 The patriarchy. The concept is so often talked about within the framework of feminism, but then why wouldn’t it be? The dismantling of the patriarchy is one of the main foundations of feminism. Yet how the patriarchy affects First Nations communities in Canada seems often forgotten. We fail to recognize patriarchal systems and how they connect to the colonial systems that were put into place by European and British settlers. And failing to look at this fails feminism: like Audre Lorde said, “I am not free while any woman is unfree, even if her shackles are very different from my own.”

These patriarchal systems have not always existed, but were instead brought during Europe’s colonization period. It was a very different situation for Native women before this time. As many scholars have reported, communities were extremely inclusive, and early explorers documented that there were no hierarchies in place. The 1996 Report of the Royal Commission of Aboriginal Peoples also noted that women played a prominent role in the political and cultural life of many traditional societies, and took on a range of roles as hunters, cooks, meditators, medicine people, and even Matriarchs. Women and men shared roles equally because male dominance hadn’t been introduced. There was a mutual respect between everyone.

The Indian Act was introduced in 1876 and largely contributed to the enforcement of the patriarchal systems that still exist today in Indigenous communities. The Act consisted of discriminative stipulations on the basis of sex, including those that stripped First Nations women of any involvement in the political process. It also included sections that dealt with the passing or loss of Indian status for First Nations women (like if a First Nations woman married a non-Native man).

Violence against First Nations women is painstakingly high and extreme.

The Indian Act has changed over time, though. In 1985, those sections that dealt with the loss of Indian status for females were removed, as they did not comply with the equality provisions of the Canadian Charter of Rights and Freedoms. Despite this, the Native Women’s Association of Canada (NWAC) still wants to eliminate the injustices present in the Indian Act, as it has patriarchal and sexist control over Aboriginal women’s lives in other ways. 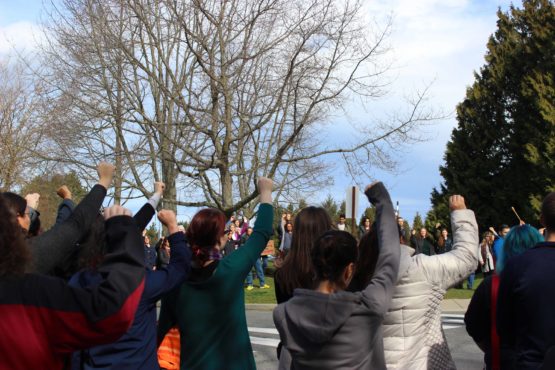 Protesters hold their hands up in solidarity at the Stolen Sisters March in early 2018. Photo by Belle White, Photo Editor

Residential schools, when introduced, continued to reinforce patriarchal ideals. Having their children sent away was devastating to entire families and communities, however this was especially so for women, and affected their cultural roles, values, and traditions.

Amendments to the Indian Act, the abolishment of residential schools, and compensation thanks to Indigenous activists fighting for our rights have certainly helped. But they cannot erase the years and years of atrocities caused by the patriarchy and colonization.

The intersection of these two systems has caused suffering for Indigenous women in many ways. The issues they face today include sexual exploitation, violence, sexism, mental health problems, hypersexualization, and more.

I am a Native woman and I am surrounded by strong Indigenous women. But the patriarchy has its grasp on many other things.

Violence against First Nations women is painstakingly high and extreme. Work is being done by groups like the NWAC to help people learn how intergenerational trauma is a cause of the systemic violence against First Nations women, but there is so much that needs to change. The Canadian government’s 2009 General Social Survey on Victimization (GSSV) reported that Aboriginal women were almost three times more likely than non-Aboriginal women to report being a victim of spousal violence in the last five years. Violence against women consequently takes a negative effect on mental health. Substance and mental health problems frequently co-occur among women who are survivors of violence, trauma, and abuse. 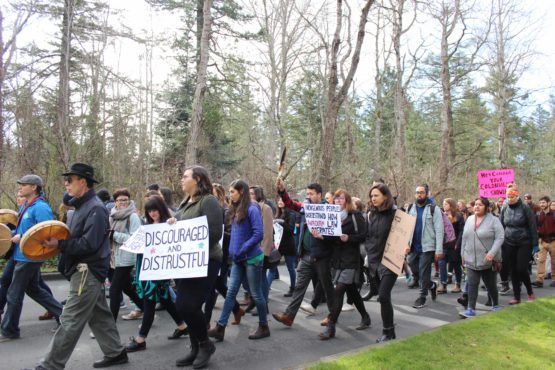 “Discouraged and distrustful,” reads one sign at the Stolen Sisters March from early 2018. Photo by Belle White, Photo Editor

Throughout this, I have written mostly about the patriarchy and its effects on First Nations women as it the subject closest to my heart; I am a Native woman and I am surrounded by strong Indigenous women. But the patriarchy has its grasp on many other things. It has largely caused the discrimination towards Two-Spirit people and infiltrates other systems like capitalism, colonialism, and land domination.

There are several organizations and groups that are working towards trying to dismantle the patriarchal (and colonial) systems which are highly impacting Native women’s lives, the lives of Native children, and Native communities. These groups are the NWAC, Amnesty International, the Native Youth Sexual Health Network, the Ontario Federation of Indian Friendship Centres, among others. But they are not the only way to bring about change, despite being very important.

Remember that silence is violence. Talk about these issues: talk about First Nations history in schools, in communities, with families and friends.

First, remember that silence is violence. Talk about these issues: talk about First Nations history in schools, in communities, with families and friends. If you’ve read this and you aren’t First Nations, please don’t always rely on us to inform you. Listen to us. Read our stories. No more Indigenous women, girls, or Two-Spirit individuals should be lost because of the long-standing effects of patriarchal ideals brought by European and British settlers. No more.

The ‘gift’ of the patriarchy was unwelcome when it first arrived with colonization and it remains unwelcome in 2018. So, let’s return this gift… now.