The conduct of cops on campus

If you toured campus this month you were sure to see crowds of inebriated students wandering in packs, loudly discussing how great cafeteria food is, their new roommate’s spotless cleaning habits, and the affordability of textbooks. Interspersed between these groups are small clusters of Community Leaders, dressed in purple, politely asking the partiers to put out their cigarettes, stop vaping, and to please not drink outside. These CL’s are pilot fish, who warn of the sharks in black — Campus Security and Saanich Police Officers.

These officials are far less polite than their purple counterparts, and they do not hesitate to ticket those who are not following campus rules.

I was reminded of this during my most recent visit to campus, the first in over a year. My friends and I had driven to campus, and it took only a few seconds once we’d left the car for two policemen and a Campus Security officer to descend upon us. I’d gotten onto my skateboard once my friends and I had left our car, and a police officer told me not to do any tricks on campus, for fear of liability. The other officer present began to harass my friend regarding an open can of beer. 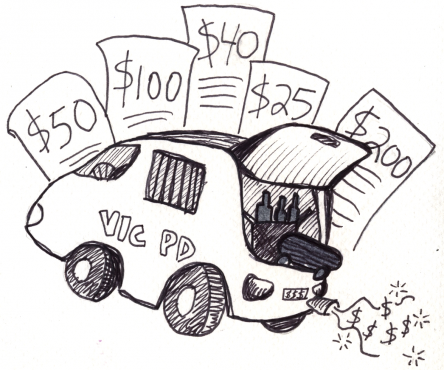 I attempted to chat with the officers, making small talk as they took my friend’s name and date of birth. I politely asked them about their work and about the legal system as a whole, but I soon had to ask them to please speak more calmly as my friend had broken into tears. My friend’s name, which she had correctly reported, did not show up in Saanich PD’s database, prompting a barrage of accusatory questions. The officers in question showed no empathy, and told me that their peppering of questions was them being calm; that the situation could get a lot worse if I wanted it to.

There is no reason that a police officer should ever have to raise their voice or speak down to a student. Cops carry guns, tasers, and handcuffs, and if any student is stupid enough to try to run from a ticket, they can incapacitate them with ease. An officer who decides to give a ticket can do so politely, with a calm approach to the situation, which also allows them to better distinguish between those who ought to be ticketed and those who would be better let off with a warning.

By now I’ve become accustomed to the officers who patrol campus and their aggressive manner of dealing with students. In their defense, it’s not difficult to see why it is they’re so assertive. Many students refuse to talk with police at all, and I’m often amazed by their utter disregard for the rules.

I believe these students to be in the minority, however, and the fact that Saanich PD officers immediately utilize threatening rhetoric, as opposed to talking with students, is appalling. It’s easy to demonize the officers when even the most paltry offences are met with fierce condemnation. Officers often seem to be on power trips, with no other recourse than the “scare them straight” style of teaching. This might be necessary in some cases, but calm dialogue would demonstrate the humanity of officers far better than aggressively attempting to take control of every situation. Once we can see the officer is reasonable, we’re more likely to  understand their point of view (demonstrating the error of our actions) and comply with their demands.

I don’t mean to suggest that the rules set in place by our university are unjust; in fact, I consider them to be applied far more soberly than the students on the receiving end. However, the approach being taken to campus policing is so heavy-handed that police officers may be increasingly viewed as enemies rather than allies. With examples of police officers overexerting their power constantly in the news, it seems we live in a society where these individuals view their authority as supreme and inalienable. When it comes to campus policing, this mindset has observable negative effects on the students that the officers are sworn to protect.