The cosmos and spoken word

The Victoria Festival of Spoken Word held its Festival Finale on Feb. 28 in front of a near-capacity audience at the Metro Theatre, an unassuming venue behind the vast Alix Goolden Hall. The atmosphere was excitable with the airiness of a party. Anything was possible —there was even beer on tap.

Poet of Honour Brendan McLeod led the first half of the show with three acoustic sets and stories. The festival was formally “spoken word,” but performances were intentionally not limited to the spoken word genre. Music, dance, and improvisation were incorporated throughout the festival and the finale.

McLeod, with his acoustic sets, had the audience peeling over with hair-trigger laughter. The audience was diligent enough to do sing-alongs, even to the words “everyone I know is nicer than the Pope, nicer than the Pope — O,  Lord,” citing past instances where the Pope (which Pope remains unspecified) covered up sex abuse cases as an archbishop.

Stephen Harper did not escape a political critique in the song “Robocalls,” as McLeod’s lyrics point out the irony that Harper, who enjoys playing the piano and performing Beatles covers, has cut funding to art programs.

McLeod had the audience under his thumb. He is likeable, charismatic, handsome (because acoustic guitars have a wooing magic), and most importantly, self-deprecating enough to recognize he’s full of shit. Regardless, McLeod was entertaining in a way that spoken word can neglect to be; reigning with a comedic mode. The topics, especially in slam, are heavy and can spur feelings of melancholy. 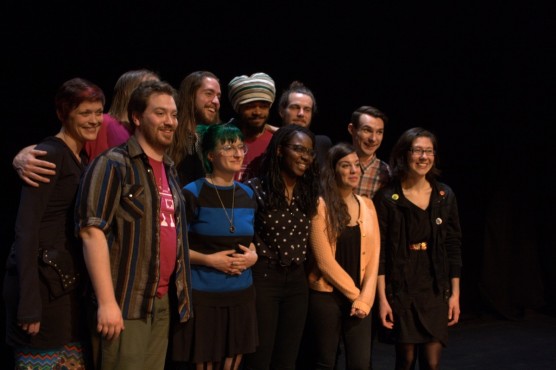 The mood in the finale was the opposite. While there were political and social critiques — obsessive Internet dwelling was one — the overall mood was happy, showing that people can laugh at themselves or the speaker’s confessions.

The second half of the show was unique. Twelve poets created material that morning for the evening show. This creative process includes planning a coherent and logical message for an hour and a half show, and intense memorization, all with the possibility of a hangover.

Beginning the set was a man who sat alone under a spotlight making noises, which were a mixture of cartoon computer sounds and beat-boxing. The rest of the poets drifted onto the stage in disjointed movements to the sounds, moving around as if they were particles in the darkness representing the cosmos.

God was a reigning theme, mostly from a comedic, secular perspective. A modified form of universality was expressed, which gathers meaning between the interconnections among people on earth and in the universe.

I was moved by the show, entertained, and I shifted into an introspective mood, which is nice to take in while alone. Spoken word affects us in intimate ways and at times, without romanticizing too much, it can be like looking into the eyes of someone you would do anything for, listening, whether it is sorrow or a confession.

Speaking to another person is an intimate act. In the everyday, communication is reduced to half-hearted token phrases complemented by aversions to eye contact. In the spoken word genre, the speaker has intent and a desire to speak—to be heard. Of course, in the context of a show, the audience’s intent is to listen and through this mutual willingness, there is power.

When people both speak and listen with intent, real feelings develop and genuine connections are possible. I believe two modes of communication, to speak and to listen, make life for people with intent, worth living.