The importance of Daylight Saving Time

Although the bi-annual time shift is being pushed to extinction, here’s why you should care about the tradition 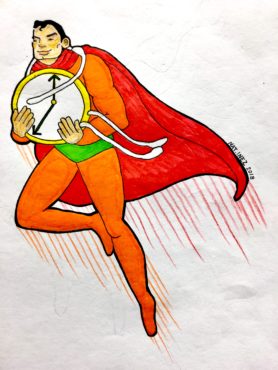 Originally a satirical proposition by Benjamin Franklin that later became an official proposition  by a New Zealand bug expert in 1895, Daylight Saving Time (DST) has evolved into one of the greatest bi-annual debates across the world with many wondering why we still observe the tradition.

Some are opposed to the idea of switching our clocks twice a year, while others relish in the added daylight of those summer evenings.

Whatever side of the clock you stand on, it’s important to note the historical, and rather impressive, origins of DST.

Franklin is widely lauded as the pioneer behind switching our clocks twice a year, but he merely proposed the idea in an 18th century satirical article as a way to save money on candle and lamp oil.

The essay was titled “An Economical Project,” and was written for the Journal de Paris in 1784. Franklin writes about being awoken by a loud noise at 6 a.m., and how he notices the sun has already risen.

He then comes to the realization that the citizens of Paris could save crucial time and money by waking up with the sun.

“Your readers, who with me have never seen any sign of sunshine before noon, and seldom regard the astronomical part of the almanac, will be much astonished as I was, when they hear of his rising so early,” Franklin writes. “An immense sum! That the city of Paris might save every year, by the economy of using sunshine instead of candles.”

Although Franklin never thought any sort of official daylight-saving system would be adopted, over a hundred years later, George Vernon Hudson, a specialist in insect biology, presented the idea to the Royal Society of New Zealand.

Hudson’s proposal stemmed from his frustration that dusk dawned too early in the summer hours, thus interfering with his evening bug-collecting rounds.

Hudson’s proposal stemmed from his frustration that dusk dawned too early in the summer hours, thus interfering with his evening bug-collecting rounds. He was mocked and ridiculed for suggesting a proposal that was deemed confusing and unnecessary, but the world’s view began to quickly change.

After a decade-long campaign by British businessman William Willett, Thunder Bay, Ontario adopted daylight saving measures in 1908, and Germany became the first country to adopt DST in 1916 as a cost-saving measure during World War I.

Many countries followed suit, with the United Kingdom and the United States adopting DST in 1916 and 1918 respectively.

And Hudson’s home country of New Zealand finally embraced the measure in 1927. Who doesn’t love a true underdog story?

After uncovering the history of daylight saving time, it’s impressive to see how it evolved from a satirical joke, to a bug biologist’s proposal, to finally become a businessman’s personal campaign.

Now, I wonder, why would we throw all this history away? Many provinces and states have either tabled legislation to abolish DST, or have already disregarded its use entirely.

Daylight savings is a bi-annual right of passage … it allows for those early nights snuggled by the fire, reading a book.

For example, the state of Washington proposed a bill in 2015 to forgo recognizing daylight saving time, while certain parts of B.C. already ignore DST: Creston, Dawson Creek, and Fort St. John don’t switch their clocks forwards or back bi-annually. Meanwhile, the entire province of Saskatchewan refuses to recognize DST.

If you ask me, that’s a shame.

Daylight savings is a bi-annual right of passage. It’s the point where we transition from fall to winter, it allows for those early nights snuggled by the fire, reading a book. It’s also the time in spring where the nights become lighter, and we can start to look forward to those late summer afternoons on the patio by the lake.

Sure, it can be a nuisance to switch your clock twice a year, but it would be a shame to trash the work of so many individuals who risked being laughed at so we could enjoy a magical summer sunset at 10:00 p.m.