The Malahat Review, a literary journal that compiles the best in Canadian poetry, creative nonfiction, and fiction, is celebrating its 50th anniversary and 200th issue with a party at Munro’s Books on Nov. 8.

The event, scheduled from 7:30–11 p.m., will honour Victoria’s literary artists — past and present — and mark the formal release of the publication’s most recent issue (its 200th), which includes the work of Leah Callen, an MFA candidate in writing at UVic. 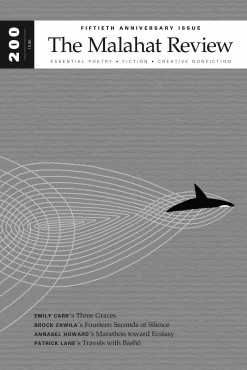 The most recent cover of the Malahat Review. Photo provided

“I’m both stunned and stoked that my poem is getting published alongside so many brilliant writers,” says Callen of her poems being featured in the landmark issue.

“It will be quite touching to see my neophyte verse printed in the same pages as my poetry profs who have such illustrious careers,” she says, crediting Tim Lilburn and Lorna Crozier, present and past UVic professors respectively, as her poetic mentors. “It’s humbling to have my little poem in a publication with work by Emily Carr, our homegrown goddess of Canadiana.”

UVic works with the Malahat Review to unearth and foster fresh voices in Canadian literature. In addition to contributing around 50 per cent of the journal’s budget, the university supports the journal through the internship, work study, and volunteer programs that provide up-and-coming UVic writing students access to the inner workings of a successful literary journal.

“And of course, students are welcome to submit their work, though they get no special treatment,” says the Editor-in-Chief of the Malahat John Barton, telling the story of UVic alum Eliza Robertson who won the Far Horizons Award for Short Fiction in 2009 — in her second year of school, no less. Robertson recently published her second book, Demi-Gods, with Penguin Canada.

“She’s often told me that receiving my email notifying her that she won was a watershed moment in building her confidence as a writer, that her belief that a writing career might be open to her,” says Barton.

David Leach, Chair of UVic’s writing department, talks about the impact the Malahat Review has had in the community.

“I think it’s had a huge, perhaps inestimable, impact both for writers and readers because a great writer has to be a great reader first,” says Leach.

“To be in this environment that is publishing I think easily one of Canada’s, and certainly North America’s, best literary magazine, you should be, as a student, as a community member, exposed to this amazing poetry and fiction. They embraced creative nonfiction at an early stage as well.”

Leach also says that getting to a 200th physical issue is an amazing feat in a now-digital publishing climate. 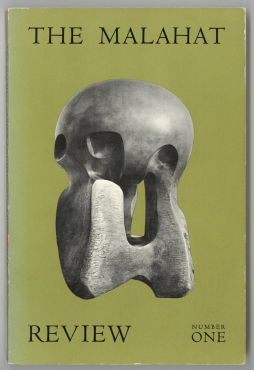 “It’s tough when your CV has a bunch of publications that no longer exist, and mine has a lot. As a magazine writer, my CV looks like a cemetery of once-great publications,” Leach laughs.

“So to have that incredible continuity to look at 200 issues, a 50th anniversary issue . . . and also to maintain that level of excellence as well, both in the contents and also the design . . . the Malahat publishes these beautiful books and they’re often on the leading edge of things.”

Barton has a theory as to why the journal has lasted for so long.

“The excellence of the content attracts excellent submissions, from which still more excellent content is chosen and published. As a result, from the beginning, writers have wanted to appear in the Malahat,” says Barton.

“I think the Malahat Review is hugely important in cultivating and protecting the Canadian point of view in literature. And it upholds a certain standard,” says Leah Callen. “I’m just grateful for the opportunity to have my words heard.”

The Malahat’s 50th Anniversary-Issue Launch Party is a free event hosted by Munro’s Books on Wednesday Nov. 8 at 7:30pm. Information on the Malahat’s internship and volunteer programs is available on their website at malahatreview.ca.