Every year, white-hot opinion pieces are printed to figuratively burn holes through newspapers far and wide.

This year, however — fueled by the numerous outlandish statements of U.S. President Donald Trump, the outbreak of sexual harassment allegations amongst celebrities, and a number of other controversial happenings — seemed an especially big year for scalding ‘hot-takes.’

Here are the Martlet’s five hottest op-ed’s of 2017, but be careful: they may be too hot to hold in your hand or read through your computer screen.

Last January, while much of UVic was battling unseasonably cold temperatures, this opinion piece melted some of the winter weather brought on by the Great Snowpocalypse of 2017.

Since the beginning of the UVic women’s varsity basketball team in 1968, they have always played before the men’s basketball team. This has created a massive discrepancy in fan attendance for the two games, as approximately 70 per cent of the spectators — or about 400 to 500 additional people — don’t arrive until there are a few minutes left in the women’s game (just before the men’s tip-off). In the Canada West Conference, which UVic is a part of, there is no rule for determining which team should play first; instead, it’s up to the individual universities to determine the start time.

Therefore, the result of UVic’s decision to start the women before the men has left their women’s team without three and a half quarters of enthusiastic fan support, all while the men recieve full bleachers of enthusiastic spectators cheering them on. 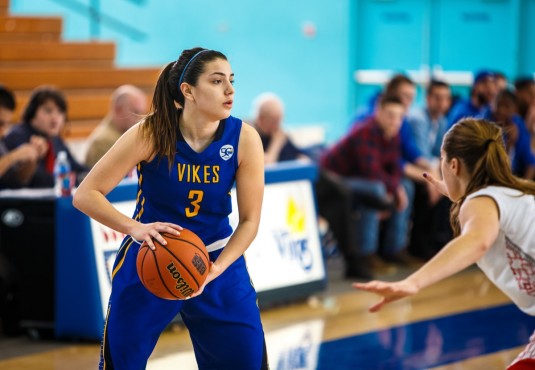 UVic’s women’s basketball team were the subject of opinion piece this year. Photo provided by APShutter

The housing crisis in Victoria has been well-documented in the past, but in this piece, former UVic student Sonia Hrynchyshyn wrote an open letter to the university about why she wouldn’t be coming back to study at UVic.

Hrynchyshyn has a self-proclaimed “nerdy passion” for learning, but the skyrocketing price of rent significantly damaged her mental well-being and made her second-guess her choice to study in such an expensive city. Hrynchyshyn mentioned the breaking point for her was living in an illegal basement suite with no windows or heat while her friends in other various Canadian cities had no problem finding affordable housing during their undergrad.

In the end, Hrynchyshyn professed her love to UVic in the letter. However, because of the city the university is situated in, she had to put her schooling dreams on hold.

In this piece, Alana Sayers outlined her struggles as an First Nations writer while working in a white man’s business.

Sayers began the article by pointing out how Indigenous lands have been exploited by the Canadian settler state over time, and how this same trend follows in Indigenous literature.

For example, Halloween stores are typically filled with ‘native’ or ‘tribe’ outfits, the mostly Indigenous-story-based film Twilight was a billion dollar industry in Hollywood, and early invaders stole stories of the ‘new and exotic’ Indigenous world they stumbled upon.

Sayers mentioned the difficulty of working with the white people who are the gatekeepers of publishing and how she hasn’t published her first novel due to white editors asking her to change parts in order to be more profitable to white Canada.

Sayers ends the op-ed with a call to action to those white publishers and writers to invest in writers of colours and not use or write the stories of Indigenous people.

My experiences with sexual harassment — Aug. 10

Our coverage began in March of last year, when we published a news piece about sexual harassment allegations against the university’s athletic centre. However, the news continued throughout the summer when a student named Sierra wrote an opinion piece about her experiences with men continuously ogling and leering at her in the gym.

Sierra recalled how she told one man to “fuck off” after he was gazing in between her legs, and when she talked to the front desk, one CARSA employee defended the man by suggesting he was “simply looking.” This wasn’t the first time Sierra hadn’t received support from CARSA employees, she wrote, as other workers on other occasions automatically took the side of the man.

As a result of Sierra cursing out the man, she had her CARSA membership suspended for one month by Michelle Peterson (Vikes Associate Director of Finance & Operations), who said she should have called security instead of verbally calling the man out.

Ironically enough, upon returning to CARSA a month later, Sierra signed a new waiver which mentions the prohibition of sexual harassment but includes an even stricter dress code for the gym.

The Martlet Staff dropped this white-hot take about the mind-boggling decisions of the UVSS in mid-October, discussing how one health care slip-up cost one UVic student an important Cystic Fibrosis drug.

The editorial scolded the UVSS for their false-hope promises and lack of transparency and communication with students. Every March, the article read, during the height of student elections, many bold statements are made by candidates during the election. In the past, promises have included plans to open a Tim Horton’s or a petting zoo, yet none of those proclamations have come to fruition. The op-ed highlighted the fact that the UVSS does hold a lot of power, but in many instances doesn’t know how to use it properly.