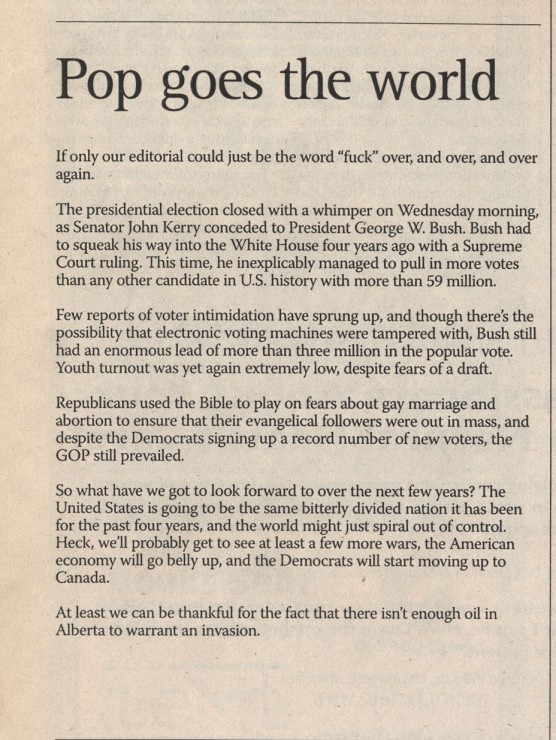 Our outlook was not entirely positive on Nov. 4, 2004. Via the Martlet archives

WELL FUCKING SAME, Martlet staff of 2004. With just over 24 hours to let the shock sink in that Donald Trump has actually won — he is the next POTUS and this isn’t a glitch in the Matrix after all — how do we accept this new reality?

Published just a day after the results of the presidential election that saw George W. Bush re-elected, an editorial by Martlet staff outlined the disappointment and shocked reaction to the 2004 American election.

“Republicans used the Bible to play on fears about gay marriage and abortion to ensure that their evangelical followers were out in mass,” the editorial read, “and despite the Democrats signing up a record number of new voters, the GOP still prevailed.”

How relatable is this twelve years later? Well, the use of fear and hate speech evidently didn’t go away. As the New Yorker put it yesterday, this election is “a triumph for the forces, at home and abroad, of nativism, authoritarianism, misogyny, and racism.”

What did our staff say about the four years following Bush’s second win? “The United States is going to be the same bitterly divided nation it has been for the past four years, and the world might just spiral out of control.”

However, has this divided nation come together since 2004? Not so, according to Paul Krugman, who wrote in the New York Times on election night that Americans have a very different view for the future of their country.

“There turns out to be a huge number of people — white people, living mainly in rural areas — who don’t share at all our idea of what America is about,” Krugman writes. “For them, it is about blood and soil, about traditional patriarchy and racial hierarchy.”

So what does that mean for the rest of the country? According to our 2004 editorial, it meant that with Bush in power, “we’ll probably get to see at least a few more wars, the American economy will go belly up, and the Democrats will start moving up to Canada.”

Well, it’s too soon to tell if the first two predictions will come to pass with Trump’s presidency, but CTV reported that the Citizenship and Immigration Canada website became “temporarily inaccessible” on election night due to “a surge in people trying to access it.” Perhaps all the Democrats will start vying for Canadian citizenship — a lot of people have certainly said they will.

Suffice it to say that this is just another reason to blackout 2016 from the history books. Canada’s only consolation? We survived Bush — and we will survive Trump.