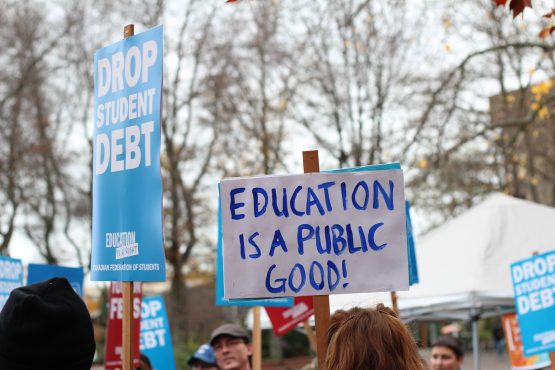 A photo from 2016’s Day of Action event at UVic where students rallied in support of lower tuition costs for university students. File photo by Myles Sauer

“When public colleges and universities operate under a knowledge/education regime informed by academic capitalism, they begin to see students as revenue sources and products. Instruction is redefined as workforce preparation more than as personally and socially enhancing education.”

She was sure the new tuition increases would make attending UVic very hard for many international students. She also explained that the new four per cent hike on current international students will be making things harder for her personally.  She does not, like a certain demographic at UVic, come from a rich family.

My friend described how the Board of Governors claimed this would help raise the quality of education at UVic. Like her, I strongly disagree. Even if the newly acquired funds are properly allocated into deserving areas (which, according to the neoliberal university model, do not include the Humanities), the fact is this move will only serve to further filter incoming international students based on income, while causing further harm to student wellbeing and performance in general. Importantly, such consequences aren’t merely hypothetical, but already apparent to many who study and work at UVic.

The budget passed by the Board of Governors states it is matching the rates of similar B.C. universities. To fall in line with this logic is a prime example of the groupthink that is currently dominating many Canadian institutions, as the logics of competition, profit, and privatization are so taken for granted that the needs of individuals (in this case students) are no longer considered the top priority.

Euphemistic talk of quality and diversity masks the true nature of such policies, and the outcomes reflect a wholly different reality.

The fact that many international and domestic students are already struggling financially, while also struggling with the anxiety of debt and uncertain job prospects, doesn’t seem to factor into the hearts or minds of the privileged few who make these decisions. The fact that students across Canada are struggling with troubling rates of stress-related mental health issues—of which financial stress has been shown to be one of the top causes—doesn’t enter their logic. They take it for granted that universities be run like businesses in this day and age, without considering the possibility that this model may actually be harmful to students.

A National College Health Assessment survey conducted in 2016 showed that 40% of UVic students (50% of undergrads) consider finances as a major cause of stress (the highest cause of stress below academic pressure; up by 5% from 2013). Alarmingly, 13.8% of UVic students reported having problems paying for basic living necessities “most of the time or always”. Numerous studies have also demonstrated a strong relationship between mental health issues, academic performance, and financial stress. Such findings should silence any argument that students benefit from higher tuition fees.

There are, of course, alternatives, though they may require the cooperation of greater governing bodies. Numerous provinces have implemented tuition freezes at one point or another, to at least try to temporarily alleviate pressure on students, and in Europe numerous countries have eliminated tuition or moved to heavily subsidized tuition fees. The latter demonstrates the role that federal and provincial governments should be playing in this matter, as well as the importance of informed and active democracy. Regardless of such measures, the onus falls on the Board of Governors to make decisions that  reflect the wishes and needs of UVic students. They are currently not living up to this responsibility. 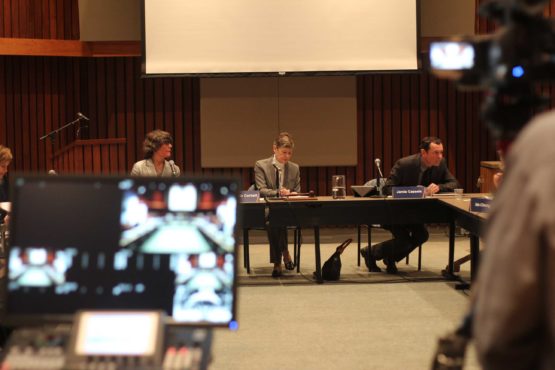 Jamie Cassels speaks to another Board of Governors member before the meeting. Photo by Cormac O’Brien, Editor-in-Chief

The Board of Governors were very sly to hold this meeting at the end of the semester before summer break. They knew that many students are running on fumes at this time of the year, and that they could implement this change with as little fanfare as possible. The timing meant a far less likelihood of students organizing around this issue. Had this process been more open and carried out earlier, I’m sure more students would have protested in one way or another. Everybody’s tuition fees just went up (again), already ridiculous parking fees just went up, and students should be furious.

The neoliberal restructuring of Canada’s public institutions began in the 1980s under Brian Mulroney, and was further implemented by subsequent federal and provincial governments (Conservative and Liberal) in the following decades. These changes meant the defunding and privatization of Canadian health care and education systems. We’re seeing it in full swing now in our post-secondary institutions, as students are expected to shoulder immense debt for something that should be a publicly-funded service, while banks and corporate interests make a killing. Official rhetoric from government and education officials continues to reinforce the neoliberal values of competition and profitability. A system that already favours wealthy individuals continues to be fine-tuned to further cater to such people, while disenfranchising so many others (including a lot of intelligent and passionate students who could otherwise contribute a great deal to institutions like UVic).

Euphemistic talk of quality and diversity masks the true nature of such policies, and the outcomes reflect a wholly different reality. High tuition fees impact student health and performance in very negative ways, and prohibitively high fees for international students limit diversity to individuals whose ability to participate and contribute is largely determined by their financial resources.