UVic is that bad neighbour 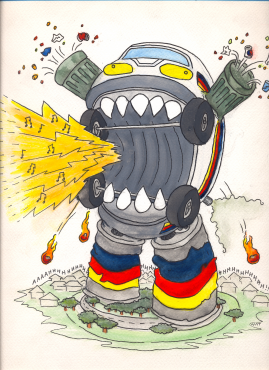 Noise, garbage, and parking are the three things that turn UVic’s campus into a monster for anyone living nearby. Graphic by Nat Inez, Graphics Contributor

The issue of UVic’s reputation as a neighbour came to light recently at a Martlet story meeting. There were about six or seven of us talking about how ridiculously annoying it must be for people living across the road from the university to deal with students trying to park on their lawns.

“Man,” I realized out loud. “UVic must be a really shitty neighbour.”

The more you think about it, the more embarrassing you realize the situation is. Thousands of UVic students descend onto campus every day, and for as much of a nightmare as it can be for one student to be living among their messy, chaotic peers, it must be much worse for someone living a block or two off campus.

For one, UVic students clog up every single mode of transportation. Just try and take a bus at 9:30 on a Wednesday morning. It’s absolute chaos. I swear I’ve seen drivers stack four people to a seat just to accommodate yet another student with an oversized Herschel backpack.

Cyclists are also a point of contention. This isn’t limited to university students, but I’m sure that the sheer number of students zipping through stop signs and over sidewalks must instill terror into any Gordon Head parent trying to reverse out of their driveway. With that said, I’m not sure I can blame students for being awful cyclists around the university—liability payments are a great way to pay off that student debt.

I myself am a part of this problem. Most mornings throughout my second and third year, I parked on Edgelow Street, in front of strangers’ homes. I was cutting across lawns and taking up space along with dozens of other students, on just one of the many streets surrounding the university.

Then, when the city inevitably turned the street into a residence-only parking zone, I had the gall to complain about the fact I couldn’t bum a free parking spot anymore.

Sure, it’s easy to say that if UVic provided more parking on campus then I wouldn’t be so frustrated when I couldn’t freeload somewhere else. And yes, I agree that parking on campus is ridiculous (and the Martlet has written several editorials to this same point), but it’s worth noting that UVic is conscious of the effect the university has on neighbouring houses.

In an article published in early September, the Martlet reported that previous UVSS boards had trouble instituting large-scale concerts in open-air venues on campus. One part of the difficulty involved is a number of university noise restrictions, based on keeping the neighbours happy.

The university has Municipal Liaison Councillors who talk with the districts of Saanich, Oak Bay, and Victoria to work “with municipalities to address concerns, maintain positive relations, deliver accurate information about the University, and explore ways in which we can collaborate to benefit the region.”

So it’s clear that the UVic administration is aware of its possible bad neighbour status, but it’s a self-awareness that the university body does not possess.

Spend enough time in Cluster or Mystic Vale and you’ll see the effects of living next to thousands of 18-year-old hedonists. The garbage and the noise are incredibly frustrating for anyone walking through the beautiful nature that surrounds UVic.

There are plenty of solutions to this, I’m sure. UVic could host information sessions with people living in the neighborhood, ask them about problems, and develop policy based on their feedback. We could institute more recycling and compost bins around Cluster. We can provide incentives for clean-up efforts on campus. We could either create more parking on campus or work on lobbying BC Transit for more buses and less crowded seats.

Or we can do what I did whenever I had a shitty roommate in first-year residence: do nothing and just mutter angrily to ourselves.