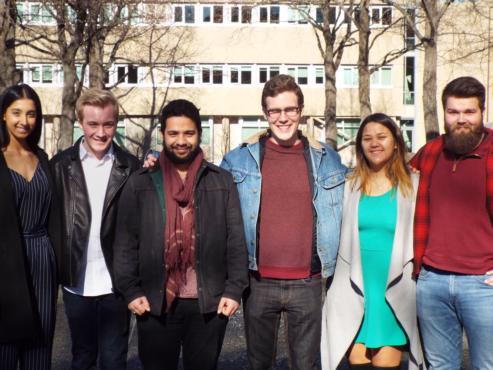 What are the three most important aspects of your campaign platform?

Green: Representation and accountability are [two] of the most important things for our slate. I believe that in order to be accountable to students, the UVSS has to actually accurately represent them, their values, their opinions, and their area of study. Engage UVic has worked really hard to build a team that fits these criteria.

Daisley: We plan to continue campaigns that are focused on mental health. School is an important part of our lives but students shouldn’t need to feel [the] need to sacrifice … mental well-being for slightly better grades.

Basi: And we can’t forget fun events! I think the Student Union needs to work on being more approachable, and that means having some great events that help build community. Our slate is dedicated to ensuring the Society works for you and runs well, but we also want to make this a fun campus.

What did last year’s board do well and what did they do poorly?

Lee: This year, [the board has] been working with B.C. Transit to establish a summer U-Pass — something Engage UVic is committed to finalizing  [The board] also managed to shorten the appeals process for Health and Dental plans. For years, the UVSS has lobbied for more mental health support for students and student housing, and this year the province announced their plans for a mental health resource online and by phone.

What compelled you to run in this election?

Scott-Bigsby: Each of us has our own reasons for running, but there’s a recurring theme — a lot of us felt like our voices weren’t always heard by the UVSS, just by nature of its design. Our Student Society is a complicated organization, and it’s not easy for people to learn the ins-and-outs. The UVSS is meant to be a representative democracy, and we want people to know that there will be someone on your side who understands your point of view.

Türker: This past year there wasn’t a Director of International Student Relations on the board, and I wanted to make sure that wouldn’t happen again. I think international students can sometimes feel like people aren’t always looking out for their best interests, and that should change.

What is the biggest issue students on campus face, and how would you address it if elected?

Lee: Our most widespread problem is probably a lack of communication. Students are faced with a brick wall when trying to interact with the university in any context, and often a cold shoulder when talking to their professors. Many barely know the Student Society even exists. Of students who responded to a UVSS survey this past year, just over half of the respondents were aware that the Students’ Society was a separate entity from the university. That’s outrageous and needs to change. People need to know that [the UVSS is] here to support you!

Scott-Bigsby: Along with a problem of communication comes the issue of accessibility. UVSS finances and information to do with board operations are all public — but they aren’t necessarily easy to find if you don’t really know what you’re looking for. We plan to publish monthly finance reports, stream board meetings online, and keep a record of which directors actually attend meetings. We want to boost trust that students have in the UVSS.

Türker: A lot of international students have a bit of a hard time adjusting to life on campus. A decent number of them can get the impression that the university doesn’t really take into consideration their ability to pay for school here, and it’s a myth that all international students are very wealthy and able to pay no matter the price. It’s not fair, and it alienates students who are already being immersed in a totally new culture.

How do you intend to raise student participation?

Basi: We spent a lot of time finding people for our slate who genuinely care about what happens on campus, and spent even longer finding people who were willing to give up some of their time at UVic to make everyone’s time here better. All of our candidates plan on campaigning as much as possible to boost student turnout this election.

Green: There’s a reason we’re calling ourselves “Engage UVic.” Participation and outreach are … folded into all of our priorities.

Daisley: We plan to increase student participation in the Federal election as well, which is why we’ll be working to do candidate meet-and-greets on campus and [running] smaller campaigns designed to raise awareness of students’ right to vote. Our Students’ Society should leverage its position to bring politicians onto campus to actively listen to student concerns.

What do you think is important for students to know about your campaign and the upcoming elections?

Green: I feel like students should know that our slate is here for students. We want to have a conversation with you, and make sure that you can make voting decisions that’ll ensure you feel represented on the Students’ Society.

Do you think it’s the UVSS’s responsibility to focus on issues outside of just the University of Victoria campus? If not, why? If so, what issues?

Daisley: A Students’ Society has major obligations both internally and externally. The students that make up the union need to have an institution in place to help them better their learning experiences at UVic and lobby the university on their behalf, but Students’ Societies wouldn’t exist without people on different campuses working together and fighting for student rights to be put into legislation. We plan to continue that tradition.

Is your slate promoting or opposing any referenda?

Scott-Bigsby: We are making an effort to get as many people out to vote as possible, and that includes getting people to participate in each referendum question. However, we decided to neither endorse nor oppose any referendum question because our slate is just not homogenous.

Basi: Our members represent five different faculties and a dozen different programs. We want people to vote, but we won’t tell them how they should be doing it. It’s their money — it would be unfair and undemocratic to pretend that our slate only has a single opinion of each referendum question, and less fair to tell other people how to vote based on that opinion.

This interview has been edited for clarity and length.

For more information on the UVSS elections, check out the Martlet’s briefers here and here.