Old issues of classic comics in plastic sleeves—Batman, Superman, Spider-Man—are strung across the room on clotheslines, and more are displayed on the upper walls in horizontal slats. The front desk is stacked with new and featured graphic novels, and there are shelves of books organized by author or artist, character, or publisher. It’s impossible to choose one place to focus; the entire store is a burst of colour and action.

This year, Legends Comics and Books is celebrating its 25-year anniversary. From publishing local artists to teaching comic classes in the evening, Legends is not only a fixture in the local community but also a prominent retailer and contributor on a national scale. Having also been nominated for the prestigious Will Eisner Spirit of Retailing Award, awarded annually at the San Diego Comic Con, Legends scooped up the Canadian equivalent, the Joe Schuster Award, in 2009. 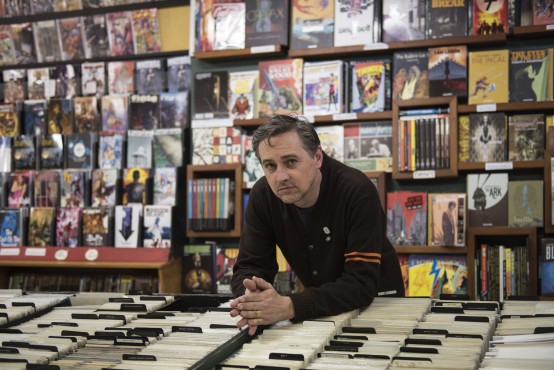 The store is currently owned by Gareth Gaudin, a UVic fine arts alum and popular graphic artist who created the loveable Perogy Cat with his wife, Bronwyn, and who was previously the Royal B.C. Museum’s artist-in-residence. He and fellow comic aficionado Lloyd Chesley took over the store in 2003 from the original founder, Grant Wilson, but Gaudin has been a key fixture since the store’s opening in 1992.

The Legend of Legends

The name behind Legends Comics has quite a history that starts in Vancouver. Throughout the ’90s, the Little Sister’s Book & Art Emporium, a queer retail store in Vancouver, was fighting censorship laws in Canada. Though the censorship laws predominantly affected queer communities, like the Little Sister’s bookshop, other media and print industries — like the comic book industry — were also taking blows. While Legends wasn’t directly connected to Little Sister’s, their legal battles were changing retailer behaviours across the country.

“Everything was getting stopped and getting looked through,” says Gaudin. The name Legends Comics came about because it was innocuous enough that it wouldn’t draw attention to itself. Had things been different, Gaudin briefly considered naming the store Valleywape, a reference to  David Clowes’ comic universe from Eightball, but Gaudin feels that the name Legends Comics and Books is part of the community now.

The store’s location on Johnson Street, the same location since its opening, is also historic. In the 1800s, the site was one of the first graveyards in Victoria. In 1859, following complaints from residents over ground quality, the cemetery’s inhabitants were moved by a chain gang to a new cemetery on Quadra Street. For over 40 years, the empty cemetery was essentially abandoned and overrun with wild pigs, miscreants, and foliage until it was renovated and developed into the existing buildings in 1892.

Over a hundred years later, in the ’90s and early 2000s, Johnson Street was home to seven comic book shops, including Dragonstrike, Island Fantasy, and Snowden’s Book Store, all of whom contributed to the local nickname “comic book alley.” By the time 1999 rolled around, Gaudin had started trading in vintage comics and auctioning them off online.

“Victoria has so many comic collectors from the ‘50s and ‘60s that if they decide to stop collecting and go and travel the world, they’ll sell the comics or, if they die, their kids bring their books in,” Gaudin muses. “But there’s seriously no shortage; I could do this another 20 years and just be happy dealing in old comics. If Marvel and DC decided to not print comics anymore, we’d be perfectly fine.”

In the past six months, Gaudin has purchased sets of Wonder Woman and the Fantastic Four, in addition to 1940s original issues of Superman and Batman comics. “Everything goes into the store for a week so I can show my regulars. And if they don’t want them — well, they’ll buy what they want and I’ll put the rest on Ebay.”

Today, there are only three comic stores on Johnson Street — Curious Comics and Yellowjacket alongside Legends — but all have found their niche in the market, with Legends mostly offering vintage items and independent graphic novels. Gaudin is happy to have neighbours; “Victoria’s notorious for their comics [… It’s] the one place in the world with three comic stores on a block.”

In the early 2000s, Gaudin attended UVic’s visual arts program. He spent two years double-booking his classes (attending the first half of one class and leaving to go to the second half of another) in order to finish a four-year program while continuing to work at Legends Comics.

“I was sitting beside the cutest girl I ever saw in university,” laughs Gaudin. ”We were in a late-night history of art class — and I drew the Perogy Cat in that class because I knew this girl had a diabetic cat. So, I drew this little pudgy cat and gave it to her, and she liked it. I started selling the cartoons that I did to classmates to raise money for this woman’s cat’s insulin. That kind of became the daily project — the Perogy Cat — and this woman turned out to be my wife. My little Perogy Cat won her over.”

The Perogy Cat grew from there — together, the Gaudins made more comics and stuffies, which people took all over the world. Fans made art of the Perogy Cat online and some have even had its likeness tattooed on them. The cat that inspired the Perogy Cat was named Tabitha and she passed away at the age of 18.

The Evolution of Comics

Even in a historically comic-friendly city like Victoria, comics and graphic novels haven’t always been a part of mainstream culture.

“They always seemed so underground. You weren’t allowed to read them in public — you wouldn’t have been caught dead reading them on the bus when I was a kid,” Gaudin says. But things are changing, especially with Marvel and DC’s expansion into film and television. “I love those movies; it makes people not be embarrassed about comics.”

And it’s true — it’s possible to walk down the street and see folks wearing Captain America or Iron Man merchandise without them having ever read the comics. Film and TV adaptations like Watchmen or The Walking Dead are considered cool. These days, asks Gaudin, “Who would read a Harlequin Romance on the bus, now? You’d read a comic.”

Recently, he’s adjusted the displays to show off trade books rather than individual issues. For the most part, people just aren’t buying in issue form: trade waiting — the act of waiting for individual issues to be bound up into larger volumes or “trades” — has become the staple of the industry. Legends is happy to follow the trend as the comic community continues to thrive in Victoria.

Currently, Gaudin is offering comic classes in the store four times a week for both children and adults, while also creating a comic book series drawn by and titled after his two young daughters, Enid Jupiter and Lyra Gotham. For him, “this is probably my proudest moment, these little comics.”

Regardless of what the future holds, he has no intention of shutting the doors or moving on.

“I don’t want to go anywhere,” Gaudin says, a smile on his face. “It’s not time to leave yet.”