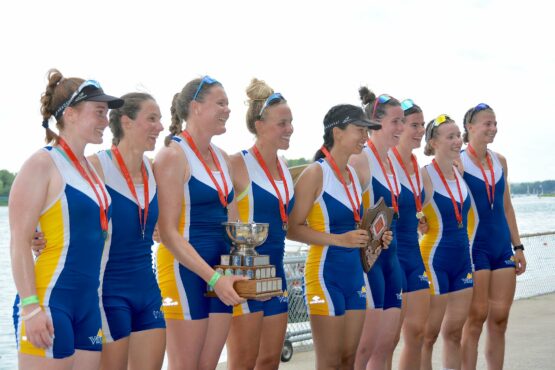 One of the most prestigious events for rowers across Canada began earlier this month at the Royal Canadian Henley Regatta in St. Catharines, Ontario. This was the first time since 2019 that athletes got to put their rowing skills into action due to the pandemic.

The 138th year of the Henley regatta was memorable for the UVic Vikes summer rowing club. The women’s team won four gold medals and the men’s team won three gold medals. As a club, the Vikes came in second place for the Efficiency Trophy.

The former Vike started as the interim coach for the Vikes in June of  2021, navigating the sails on a stormy boat during the pandemic. At that time, she had a very welcoming summer club training group that was smaller than usual due to COVID-19. With athletes returning in late August, last year’s season saw 11 fresh first-year student athletes brought on to grow the program and ensure its future success. Gumley’s personal goal for her first season as interim coach was to give the athletes a sense of normalcy with the pandemic still ongoing, especially since there were around six graduating athletes on the team.

After a whirlwind year, Gumley is now entering her first season as the official head coach of the Vikes Women’s rowing program and, as she said, a summer of hard work has undoubtedly paid off for the team at the Henley regatta.

A large summer club group was formed this year, consisting of 24 athletes and three coxies. Each one of the athletes pushed the limits with their vigorous summer work-outs and, with the help of their coaches, the women brought home gold in the senior eight, the U23 lightweight pair, the lightweight four, and the U23 pair.

The secret behind their success lies in the training during the summer, which is always a challenge due to work schedules, said Gumley.

“We could only do one structure training session a day to make sure people had enough time to go work,” said Gumley. “We have done a lot more volume training as opposed to high intensity training. The goal of the summer is generally to build a big aerobic base. So we focused on a decent amount of that for the summer, and then getting into term we will do a bit more of the fine tuning with the high intensity training.”

There is always the challenge of balancing life, school, and the rowing program’s busy schedule, so teaching the athletes the skill of finding balance in all the different aspects of life is key, said Gumley.

Once graduated, students tend to move on due to the rigorous nature of the sport. However, Gumley said there is a strong group of alumni, and every year new graduates join this group and help out by volunteering at regattas.

“It is hard to rally yourself to do a second session in a day a lot of the time but seeing them being able to do that gives me a lot of hope and encouragement that the season is going to go pretty well,” said Gumley, who strongly believes in the team’s ability to succeed.

Looking back at the history of the Henley regatta, the first championship for the newly formed Canadian Amateur Rowing Association took place in Toronto in 1880. The venues for the Canadian Henley Regatta kept changing up until 1903, when it was decided that St. Catharines Rowing Club would host this event permanently, holding it at St. Catharines Port Dalhousie’s Martindale Pond.

The women’s rowing club at UVic has a legacy of its own. Starting out in 1972, the novice rowing athletes built up a solid foundation within a few years. Some of those first Vikes went on to win Canada’s first international medal in women’s rowing in 1977.

With 55 women from the Vikes program going on to become Olympians, the success of the UVic women’s rowing is astounding. From national to Olympic medals, the Vikes rowers have left an inspiring legacy of success and camaraderie.

This year marks the 50th anniversary for the women’s rowing team. The team will be celebrating their legacy starting with the Captains Barbeque on Sept. 2 at the Centennial Stadium. Many rowing alumni are coming back in full force and are extremely excited to celebrate and contribute towards their rowing community.