What the soul does want: new Lorna Crozier poetry

What the Soul Doesn’t Want is Lorna Crozier’s seventeenth book of poetry, and the mastery that comes with long practice certainly shows. The collection launched with a reading at Munro’s Books on May 30th, where Crozier, a Professor Emeritus at UVic and a legend among Canadian poets, addressed the familiar faces of the Victoria literary scene with the energy and ease of one both in the spotlight and among friends. 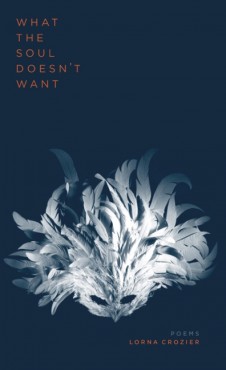 ‘What the Soul Doesn’t Want’, the newest book of poetry from UVic professor emeritus Lorna Crozier, provides a delicate and delightful balance in its content. Photo provided by FreeHand Books

Sticking mainly to lighter pieces that elicited frequent laughter, she kept the crowd captivated with an effortless stage presence. But the heart of the collection — the punch of grief — revealed itself almost insidiously towards the end of the reading, leaving a satisfying sense of balance. The whole collection contains this same duality. The subject matter is minute, everyday, and often veers towards comical — the two longest pieces in the book study the fly and the cockroach. But Crozier’s signature wit is only the surface level; below, there is an arresting undercurrent of loss and an ever-present reality of decay.

Her newest collection focuses on the universal truths of life, change, and loss, all through a deeply human lens. Western mythologies blend with personal and family histories, and the world is rural and sharply in focus, with nods to Crozier’s current Vancouver Island home but also a strong sense of the prairie landscapes of her youth. The subject matter is never showy or glamorous, and characters from literature, history, and far-flung settings share space with those from Crozier’s own life.

Rather, the inevitabilities of the world — work, family, and death — are revealed by the underappreciated minutia of the world — a bruise, a homemade pie, an abandoned house, the feet of butterflies. Everything exists at once — the underworld of Greek mythology and a Model T car; a Goodwill store and King Lear — time is fluid and haunting. In many of the most memorable pieces, vivid (but never quite fully explained) images meet cuttingly simple aphorisms. “Don’t play dead until you die,” Crozier writes. And as for the cockroaches: “they never think of not to be.”

While the reader is caught up in image, Crozier snags them into the deep loneliness of the world. There’s a bleakness reflected in a plethora of winter settings, yet an edge of the hope of spring as well.

What the Soul Doesn’t Want is a book with quiet confidence. It is a reflective book that nudges the reader to look closer at the details of life — a book with a gray tone, a focus on the colder truths of life, but not with a sense of hopelessness or negativity. The collection has an objective feeling, broad enough to give the sense of a world encapsulated, yet specific enough to suggest the authority of personal experience. It carries an edge of fear and loss underpinned with an affection that doesn’t place judgment or value on these subjects. Instead, it takes these small creatures and down-to-earth settings and characters and gives them the attention they lacked.

There is no great experimentation with form or sound, although a fascination with language and etymology is clear. The focus of the poems are their stories and characters — characters that are scattered and span centuries but are always handled with quiet control.

Crozier opens the window to a fully formed world heavy with the rural, the literature, and with a balanced, playful attention to nature and its beings. There is the ache of grief but also that of hope, change, history, and the world beyond the human that goes on without us.

In this collection, Crozier reminds readers to pay attention to everyday life, even when it may seem unappealing or insignificant. After all, as she quipped at the reading, “there are many things you can say about cockroaches.”