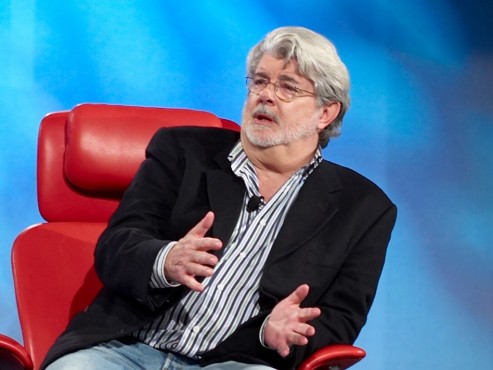 George Lucas handed over the reins to the Star Wars franchise, but public opinion still hasn’t been kind. Myles Sauer digs into why this is unfair. Photo provided via Wikimedia Commons

To say there’s been some hype around the release of Star Wars: The Force Awakens (TFA) would be an astronomical understatement. Whether it’s the introduction of new characters (What’s Kylo Ren’s deal?), the return of old ones (Han Solo looks old, in a cool way!), or just having Star Wars back (as if it had ever left), there’s lots to be excited about.

But there’s a dark undercurrent to the discussions here, one that demands attention. And that’s the apparent relief (dare I call it joy?) that one man is no longer involved in the nearly forty-year-old franchise. A man who, no matter how you slice it, was responsible for so much of what we hold dear when it comes to a galaxy far, far away.

That man, of course, is George Lucas. And the media blitz around The Force Awakens, if you look at it closely, seems constructed with the intent of exiling him to Dagobah (for lack of a better metaphor). And that’s kind of weird.

OK, calm down. I’m not going to launch headfirst into a defense of Lucas’s more questionable decisions. (Han shot first, dammit.) But consider this: at San Diego Comic Con this past July, TFA director JJ Abrams and company showed a reel of behind-the-scenes footage featuring the cast and crew waxing poetic about how amazing an experience it’s been shooting the film. It’s a great clip, but thinking about it later, what struck me as odd was how everyone talked about the film’s return to practical effects.

“JJ’s trying to make sure these movies have a physicality to them,” says one crew member. “We truly are out in a desert, a real desert.” If this were any other franchise, I’m not sure anybody would care. But for Star Wars, it’s different. The bad taste of the prequel trilogy’s green-screen artificiality still lingers on our tongues, and people are all too happy to get back to the roots of the franchise, free of stilted dialogue and annoying CGI characters — an unfortunate representation of what the franchise became under Lucas’s guiding hand.

Shortly after the release of that reel, I wrote on Twitter that the hype around TFA’s practical effects was “the most thinly veiled jab at George Lucas imaginable,” and that he “left the party” but “everybody’s staying behind talking about how much he ruined it without actually saying it.”

But the ribbing extended beyond just the effects. In May, Abrams took a swing at Jar Jar Binks, the source of many a fan’s ire since his appearance in The Phantom Menace. Abrams said, “I have a thought about putting Jar Jar Binks’s bones in the desert [somewhere in the film],” adding: “I’m serious! Only three people will notice, but they’ll love it.” And when asked at a recent press conference whether there were ewoks (another much maligned Lucas creation) in TFA, he replied with “ . . . living?”

But while everyone distances themselves from the lesser parts of Lucas’s saga in the leadup to TFA, they’re simultaneously so very eager for his approval on where the
franchise is heading. From a Dec. 7 Vulture report including Lucas’s thoughts on the film:

“So he didn’t say he liked it, exactly. But he did say, ‘I think the fans are going to love it,’ which sounds exactly like what you’d expect an ex to say at their former spouse’s wedding, after taking a deep breath, between sips of their martini.”

I get it. Lucas (willingly) gave up his baby and now we’re ready to move on. This is natural. But it seems that in everyone’s eagerness and excitement to move the franchise forward, we’ve forgotten that a long time ago, Lucas was the visionary behind it all. And while he may have stumbled creatively in later years, does he really deserve so much underhanded disdain? I’m not sure he does.

As the saga continues, perhaps we should try for a titch more perspective. Yes, if it wasn’t for Lucas, we wouldn’t have Jar Jar Binks. And we wouldn’t have Anakin Skywalker yelling “Yippee!” But we also wouldn’t have “No, I am your father,” or “May the Force be with you.” For better or worse, Lucas was the binding force behind it all.

Let’s just hope the new round of Jedi Masters can learn from his mistakes, but also repeat a few of the same successes. After all, if Anakin Skywalker could be redeemed, perhaps there’s hope for the franchise yet.