Wingin’ it: where to find wings in Victoria 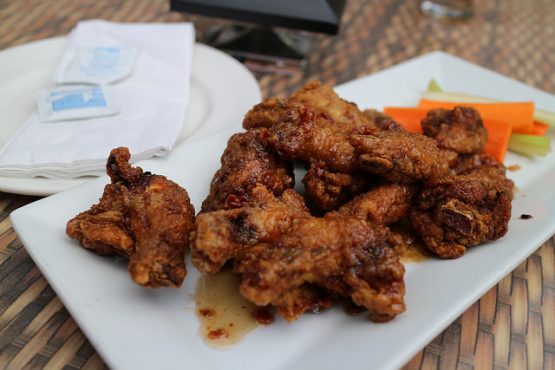 With thousands of eateries in Greater Victoria, where a rich and diverse cultural melting pot never stops bubbling over, variety truly is the spice of life. In fact, our fair city holds the rather impressive distinction of hosting the second-highest number of dining establishments per capita for the entire continent — ranking just below San Francisco.

Also famous for its health-conscious lifestyle, our “City of Gardens” has many restaurants that offer no shortage of vegan and vegetarian dishes. But for those of us who prefer to give in to our carnivorous cravings, there may be nothing that compares with the greatest culinary creation of all time: the almighty chicken wing.

The origin of the chicken wing is contested, but one popular version traces back to July 29, 1964, when the owners of the Anchor Bar, Frank and Teressa Bellissimo, suddenly found themselves faced with feeding a hungry group of college students. Thinking on the fly, and sensing that the gang needed to eat sooner than later, Teressa had an epiphany: drop a coop-load of chicken wings into the deep-fryer and smother them in a cayenne pepper sauce once they were nice and crispy (restaurateurs typically tossed wings out or used them for stock in those days). The world-famous hot wing was born on that glorious summer eve in the city it takes its name from — Buffalo, New York.

Whether you prefer your chickies and drummies oven-roasted, flame-broiled or deep-fried, and whether you munch them as appies or entrées, or you’re adventurous enough to scarf down a few pounds competitively, and whether you like them slathered in sauces or breaded and dry-spiced, the wing is a wondrous thing of beauty.

Here are just a few Greater Victoria locales to get your mouth watering and heart pounding for the little meaty morsels.

Although these guys don’t offer an official wing day, head to the heart of Tuscany Village (McKenzie Avenue at Shelbourne Street), where you’ll get a pound of them. As an alternative, you can get a plateful of juicy, boneless chicken bites in hot, honey BBQ or spicy orange glaze complete with celery sticks and dip for under $12. Combine your favourites with any two of their other tasty appies for Ultimate Trios available Fridays and Saturdays. A great deal for sharing at $11. The added bonus: UVic students get a 20 per cent discount (on regular-priced menu items) whenever they dine!

Located at 3994 Shelbourne Street, one block north of McKenzie Avenue, BP takes its wings very seriously. With the recent introduction of six brand-new flavours, they now offer 21 tantalizing palate-pleasers like the Classic N.Y. Buffalo, Mediterranean Dry Rub and the intriguing Cinnamon Maple. All wings are available fried, lightly breaded, oven-roasted or boneless. If that’s not enough to make you salivate, UVic students get a 10 per cent dining discount (except for alcohol) at this all-age welcoming restaurant.

Located in Cook Street Village, the Beagle designates Tuesdays as its wing day from 2–11 p.m. At just $6 per pound, these guys are another pretty good bang for the buck. Be sure to try the signature Bourbon whiskey BBQ sauce or Creole rub wings.

As Victoria’s premier comedy club, Heckler’s not only guarantees good times but good eats with no less than 50 — that’s right, 50 — flavours. There’s pretty much anything you can imagine. This place may well be the King of the Wing, and Wednesday means 35-cent wings. Get them in plates of 10, and be sure to try a deep-fried Mars Bar for dessert. Situated in the Ramada Inn at 123 Gorge Rd. East.

Head over the James Bay Inn at 270 Government St. for 45-cent wings every day from 4–6 p.m. and 4–9:30 p.m. on Monday and Tuesday nights, respectively. These guys are renowned for their red-hot and blue recipe, which features a healthy crumbling of blue cheese atop a plateful of sizzling hot wings.

If you are a big fan of Thai peanut or suicide wings, then Maude’s is the place to be. Stop by 3810 Shelbourne St. after 2 p.m. on Wednesdays go get your fill of 45.

It’s Mondays at McRae’s all the way! Drop by 1652 McRae Ave. at Shelbourne Street from 2–11 p.m. and start the week right by grabbing a half-priced pound for a mere $5. Don’t let the quaint ambiance fool you. This place is ablaze with the signature five-alarm jerk-style wings for those brave enough to try them. If not, there’s six other flavours to choose from, including Teriyaki and lemon pepper.

This place doesn’t monkey around when it comes to wings. With not just one but two official wing days — Tuesdays and Saturdays — the Tree is a definite hotspot. Choose from 12 flavours, including secret Buffalo sauce, chili lime, pineapple curry and jalapeño, for only 45 cents apiece. You can find The Monkey Tree at 4025 Borden St. just off of McKenzie Avenue near Quadra Street.

As the newest kid on the block located downtown at 7-1701 Douglas St., they definitely don’t mess around at the Cookshack. Great pride shines in the menu and among the most magnificent meaty treats are their flavour-layered local chicken wings. The pail o’ wings pound bucket is the all-day special on Wednesdays. As should be expected, the BBQ flavour rocks, but a must-try has to be their signature flaming pig — a spicy in-house smoked jalapeño hot sauce.

As one of the closest off-campus eateries on the list, this warm and friendly pub is another student hotspot — especially every Monday after 3 p.m. when they have a $5 per-pound wing price that’s great for any student budget. You can never go wrong with their honey garlic or sweet and spicy Thai. Located in Cadboro Bay at 2581 Penrhyn St.

This cozy eatery at 1550 Cedar Hill X Rd. just up from Shelbourne is a definite favourite amongst students. Wednesday is the day of the wing at 50 cents apiece. All of the sauces are a sworn secret, but the bells are ringing with the one-, three-, and five-alarm bird blazers. Check them out in person and on Facebook.

In the campus coop:

Situated in the Student Union Building (SUB), the campus pub offers five traditional flavours in multiples of 10 per order daily for $7.75. Every Thursday is Wing Day, and you can chow down for a mere 40 cents per wing while showcasing your karaoke vocal talents. Patrons must be 19 years of age and have valid ID.

Located at the Halpern Centre for Graduating Students at the corner of Sinclair and Finnerty Roads, this bistro-style eatery features a pound of their farmhouse drumsticks and wings from fresh, free-run, Vancouver Island-raised chickens in four different flavours for under $10. Diners of all ages are welcome.