The WordsThaw Prize is a contest run by the Malahat Review, one of Canada’s most esteemed literary magazines. It offers emerging Victorian writers the opportunity to submit works in two categories: poetry and micro-text (either short fiction or creative non-fiction). Winners receive a full WordsThaw Festival pass, a one-year subscription to the Malahat Review, and publication on the Malahat’s WordsThaw website. As was the case last year, winners are also published in the Martlet. 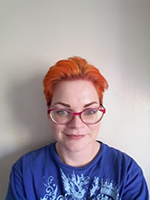 Abbey slid the milk and cookies underneath the bed before cocooning herself in a fluffy, lavender blanket. She’s wild about all things purple right now.  She grinned, blue eyes shining through flyaway, blonde, bangs. I sat next to her, book in hand; we were reading Dr. Seuss’ How the Grinch Stole Christmas. Again.

My eyebrows raised in puzzlement. Hiding munchies? That was new. “Honey, wouldn’t it be easier for Santa to find his snack if it were by the tree?” I asked.

“Those aren’t for Santa,” Abbey said, matter-of-factly. “Those are for the monster under the bed.”

When I asked her about the creature, (Abbey had named it Mub) she didn’t seem the least bit concerned about a monster dwelling beneath her bed. She’d reasoned that, since Santa liked milk and cookies, Mub might like them too.

It seemed like nothing more than a case of a child’s vivid imagination yet I felt a prickle of unease. I rose to investigate the Land of Underbed. A crumpled blue sock, some crayons, and a few dust bunnies, along with the milk and cookies; that was all. I shook my head, feeling foolish. Had I actually expected something to be there? Tossing the stray sock into the hamper, I pretended my heart hadn’t hammered with fear in the instant before I’d checked below the bed. Perhaps she gets her sense of whimsy from me.

Abbey was asleep before I finished the story. Tucking Mr. Cuddles (her plushie sea otter) in beside her, I kissed my little girl goodnight and stole from the room.

In all the excitement of Christmas day, the MUB incident slipped my mind and didn’t wander in again until that evening. I’d just sent Abbey to brush her teeth when, remembering there was food under the bed and rather hoping the milk hadn’t spilled, I reached for the plate and glass. My groping hand touched something soft and warm.

“Aaahgg!” I yelped, snatching my hand back in dismay. Then, mustering my courage, I dared to peer into the underbelly of the bed. Luminous, green eyes stared back at me, seeming as astonished to see me as I was to see them. The little beastie blinked three times in quick succession and, in a flash of stripey orange and purple fur, vanished into thin air.

Abbey’s asked if we can put more cookies out tonight.