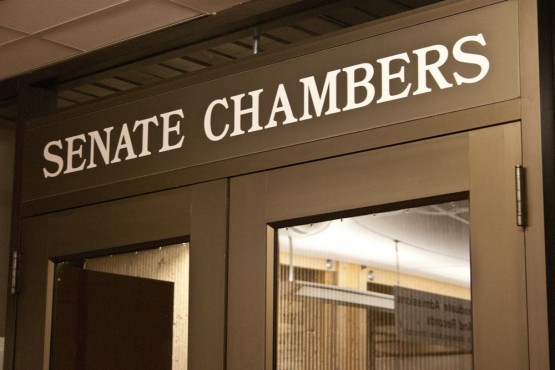 UVic President Jamie Cassels has appointed a working group to develop “effective and responsive” ways to address the executive order which bans entry into the United States by citizens and refugees of seven designated countries, it was announced at today’s UVic Senate meeting.

According to an article in the Ring, the working group “will look at the magnitude of the impacts of the executive order on campus and the needs of those directly affected.” It has been given a spending authority of $100 000 to carry out its work, and is being coordinated by Associate Vice-President Student Affairs Jim Dunsdon.

The U.S. executive order, issued by President Donald Trump on Jan. 27, prohibits travellers from Syria from entering the U.S. indefinitely, while those from the other six countries — Iraq, Iran, Libya, Somalia, Sudan and Yemen — are banned for 90 days.

At the senate meeting, Cassels said the working group was one of a few initiatives the university is undertaking to address the order. Others include developing an FAQ to address immediate questions for those who might be affected, as well as continuing to communicate with student groups such as the UVSS and Graduate Students’ Society to make sure students know what resources are available to them.

Not mentioned, however, is whether or not UVic will be waiving application fees for applicants coming from the seven countries. The University of Alberta and University of Calgary both announced this week that they would be doing so.

At the conclusion of today’s senate meeting, the Martlet spoke with Cassels to ask if UVic would take similar action. He said that’ll be determined by the working group, and that the university didn’t want to make any decisions “a priori” before gathering necessary information.

For our previous report on UVic’s response to the executive order and Quebec City terror attack, click here.

Correction: The Martlet previously referred to UVic’s announcement as being part of a press release; it was in fact an article in the Ring, UVic’s newspaper. We regret the error.