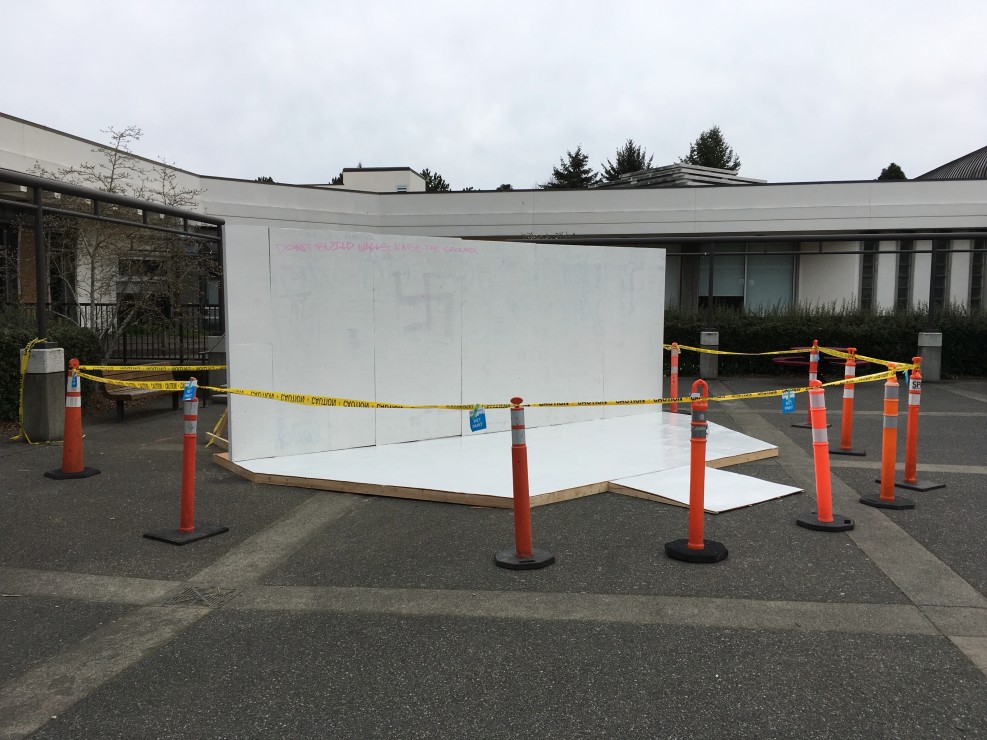 The Third Space art project was temporarily blocked off Friday morning after a number of racist messages were written on it overnight. The UVSS has now asked it be taken down. Photo by Myles Sauer, Editor-in-Chief

UPDATE 4:19 p.m.: After being painted over and temporarily blocked off with construction tape by UVic Facilities Management on Friday morning, the Third Space art project has now been ordered by the UVSS to be taken down by 8 p.m. Friday evening. The society cited a breach of the original terms of the project’s approval.

In an email to the Third Space collective signed by Dale Robertson, UVSS general manager, Robertson states that “we have received increasingly more concerns from students, the university, and the community over the wall and the impact that the inappropriate messages are having on people.”

“When the project was initially approved and was confirmed in an email later that day, it was under the understanding that messages would be removed as they pop up, thus limiting their impact,” Robertson writes. “Unfortunately this seems to not be a feasible possibility.”

The email concludes by stating that the UVSS supports the “spirit of the project” and are interested in other ways to continue the discussion “without the negative impacts that students are experiencing.”

Daphne Shaed, Third Space volunteer coordinator and one of the organizers of the project, said the Third Space would be appealing the decision. The Martlet was informed by her shortly afterwards that there is no process of formal appeal, and so the wall will be removed.

The decision comes just a few hours after the Third Space resumed the project after it had been painted over and blocked off.

The wall has been the subject of controversy for the past couple days after it was originally put up on Wednesday, March 15. The project was an initiative by the Third Space to foster discussion on campus around the issue of white supremacy and racism in the community.

Shaed was out at approximately 12:40 p.m. to once again pose the question: “How do you challenge white supremacy?”

Sign is going back up. Third Space decided to continue the project. #uvic pic.twitter.com/SXVmCrnmSp

By the time classes were underway, the wall had been painted over and blocked off with construction tape. Reports that UVic Facilities staff had painted over the wall were later confirmed by the UVSS. The image of a swastika was still faintly noticeable.

Photo and reports these were UVic staff painting over the wall. pic.twitter.com/CleFM0Fylw

Prior to Robertson’s notice to the Third Space, Alysha Flipse, UVSS director of outreach and university relations, said the decision was made to paint over the wall after the racist messages were brought to the attention of the university and the society.

“There were some really hateful things written on it last night,” Flipse said. “It was really hateful, and really shocking to see.”

Flipse said the UVSS was trying to balance the needs of everyone involved, and was keeping an eye on the situation as it developed. “[The Third Space] obviously wants it to stay up but we’re seeing a lot of students coming forward who are really upset,” she said.

“We’re seeing a lot of people from marginalized groups that are on the receiving end of the hate speech that’s on the wall, and they’re feeling really upset and not safe on campus,” Flipse continued. “We need to support our members and so we’re trying to think of ways to balance those two things.”

Zoë-Blue Coates, a UVic student and member of the Third Space collective, said she was initially apprehensive about response to the wall. “Following the Peter Singer incident [on March 1], I was really worried that [this] was going to create another tension and really escalate to something awful.”

“But, at the same time, I think that it’s really important to recognize that white supremacy is something that always exists on campus and for many people of colour, including myself, it’s something that we experience every single day,” she continued.

Coates said that addressing and dismantling white supremacy is bound to make people uncomfortable, but that the conversations taking place need to happen.

“I like [the project] because it’s this physical manifestation of what white supremacy is,” she said. “The only difference is that now people, whether they be people of colour with internalized white supremacy, or white people, [they] have to deal with it.