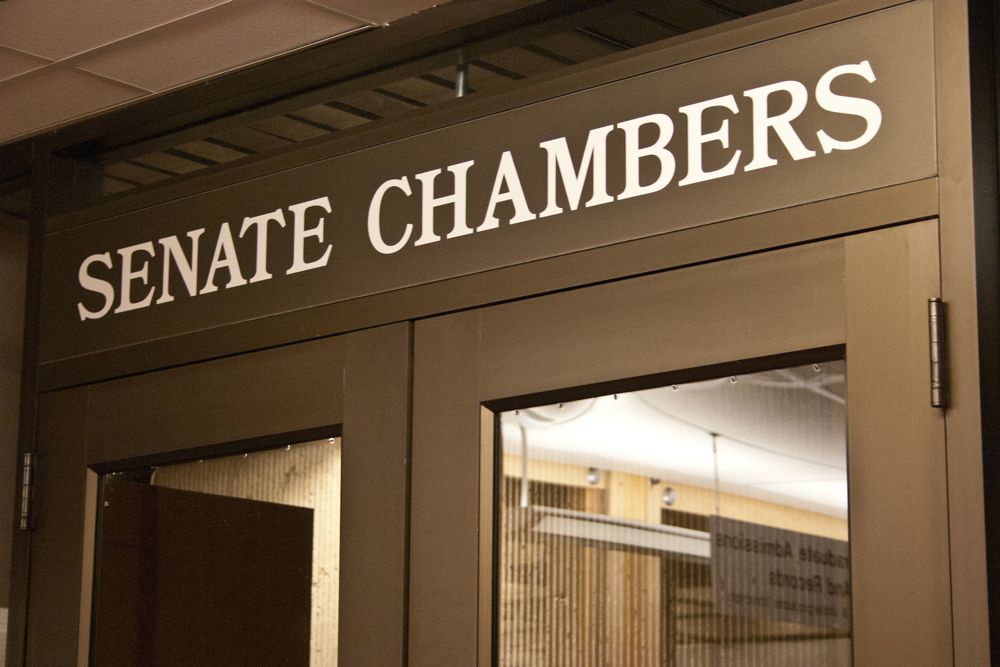 Editing service policy, joint nursing programs, and a Creative Writing minor made for a packed senate meeting on Feb. 3. File photo by the Martlet

Though the big news coming out of last week’s UVic Senate meeting was UVic President Jamie Cassel’s establishment of a working group meant to find ways to address the impacts of the United States travel ban on the UVic community, that’s not all that came up on Feb. 3.

Following the announcement, discussion continued from previous sessions about implementing a number of new Minor programs, as well as a vote on amendments to the Policy on Academic Integrity regarding the use of editing services by students. All the motions on the docket were approved, though not all without some back and forth first.

But before the senate voted on main motions, Tony Eder, director of institutional planning and analysis, reported that UVic has seen an increase in the number of students applying from the northwestern United States of around 40 per cent compared to last year’s admission numbers—perhaps due to President Donald Trump’s election.

However, Eder said that overall international applications for undergrads are up from other countries as well due to the university’s push in international recruitment.

ACADEMIC INTEGRITY: CAN YOU HELP EDIT YOUR ROOMIE’S PAPER OR NOT?

After a lengthy discussion, a motion to approve amendments to the Policy on Academic Integrity was carried.

The motion was a holdover from last month’s session on Jan. 6 which saw extensive debate over the use of editing services by students. The proposed amendments at the time were sent back to the sub-committee in charge of the policy for further revisions after many senators thought the language was too broad.

Sara Beam, Graduate Studies senator and associate professor, explained the changes that the committee made after that meeting: adding “supervisory committee” to the clause outlining what constitutes an editor; removing “contributed to” due to concerns around the definition of “contribute;” and changing “peer review” to “review by fellow students.”

Cory Shankman, graduate student senator, was concerned that graduate students would have to obtain letters from their supervisors protecting themselves from accusations of plagiarism if they included portions of other journals in their work, or any other help editing their work.

Beam said there was “nothing in the policy” to suggest that, and that “normative” procedures like quoting from other journals wouldn’t be an issue.

Marie Vance, student senator, reiterated concerns from January’s meeting around the impact these changes might have on the international student population.

“I think the assumption with that statement, and I really appreciate your concern with international students, is that most students whose first language is English can write well,” Beam said, “and as someone who teaches writing intensive classes, I’m afraid that’s not the case.”

After further back and forth, the motion was carried with a clear majority in favour.

YO CAMOSUN NURSES, COME ON OVER!

In 2013, the senate approved a proposal establishing a joint degree nursing program in partnership with Camosun College, with the final memorandum of understanding being signed in December 2015. However, Camosun students had to meet transfer admission requirements when transferring to UVic in their sixth term of the program, and a more “seamless education experience” was desired.

Therefore, a motion that senate approve the creation of new admission requirements so that nursing students can move from Camosun College to UVic not as transfer students, but as “actual UVic students,” was put forward at Friday’s meeting.

The long short: motion approved, meaning applicants to the joint nursing program will be admitted at both institutions from the start of their program.

CREATIVE WRITING MINOR GETS THE GO-AHEAD

At last, students who want to focus on the STEM subjects, but stretch their creative legs through writ- ing can finally do so by minoring in Creative Writing. The motion was put forward to provide an option for those who wanted a Creative Writing credit, but didn’t want to commit to—or didn’t make the cut for—the more intensive major program.

Students taking the minor will take core writing electives to receive their credits, but won’t be involved in the workshop classes, which are highly competitive for writing majors anyways, with class sizes maxing out at 15 students.

The next UVic Senate meeting will take place on Friday, March 3.