The forum focused mainly on representation of Indigenous and international students 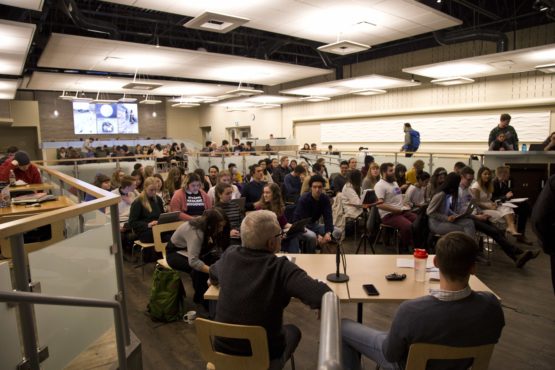 The Vertigo lounge in the SUB was unusually full on both Wednesday and Thursday as students piled in to watch aspiring student politicians debate key issues. Photo by Belle White, Photo Editor.

Only a day after aspiring student politicians laid their heads down to rest, Thursday, Feb. 28 saw candidates running in the University of Victoria Students’ Society (UVSS) elections meet once more for the All Candidates Forum. Where Wednesday’s event featured Lead Director candidates, Thursday’s event featured candidates running for Director-at-Large (DaL) positions, and the proponents and single opponent speaking about the four referendums.

For the first two hours, candidates running for DaL positions from both the Hear UVic and Engage UVic slates took to the mic for their respective two-minute presentations and an ensuing question period from the public.

Speeches ranged from broad promises, regarding sustainability, inclusivity, mental health, and affordability, to more specific ones such as changing toilet paper from one-ply to two-ply (Cedric Borchert, Engage) and reinvigorating the Divest UVic movement — a core campaign promise of the Hear slate.

The presentations went relatively smoothly, despite several absent DaL candidates who were attending the out-of-town Model United Nations conference. These individuals had friends and colleagues read their speeches on their behalf. Amongst the absent contenders was the lone independent candidate of this election, Isha Dhillon.

During reading break, Richins had filled seven bottles with butts found on campus, and used the bottles as a symbol of how he wants to document the waste that is generated at UVic.

Perhaps the most unique moment was during Kai Richins’ presentation. Richins, a DaL candidate from Hear UVic, began pulling out plastic water bottles filled with cigarette butts from his bag. During reading break, Richins had filled seven bottles with butts found on campus, and used the bottles as a symbol of how he wants to document the waste that is generated at UVic. 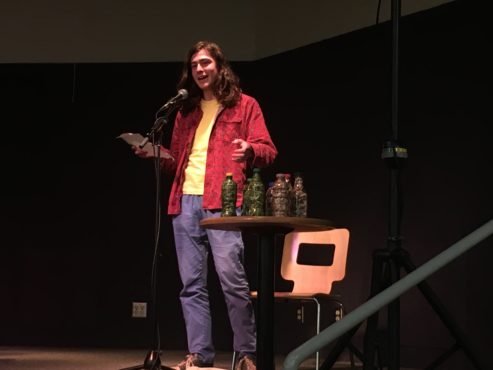 Order began to waver during question period. DaL candidates were often unable to fully answer tough questions posed to them by members from opposing slates, without whispered consultations with Lead Director candidates. At several points throughout the question period, a long pause occurred as slates huddled to come up with an answer — often assisted by Lead Director candidates. Sometimes, as a DaL candidate answered the question, audience members would shout additional questions or answers. This behaviour was exhibited by both Engage and Hear candidates and supporters.

“What are some specific plans and ideas behind the decolonization of campus?” asked an audience member. “Relations with Indigenous people are growing in importance, and I just want to know both slates’ ideas about decolonization and some plans to actually implement that.”

Stromquist pointed to the back of the room, where a large group of Indigenous students from the UVic Indigenous Studies department sat and cheered.

In terms of specific tactics, Stromquist added that their slate, if elected, would consult the elders in the First Peoples House and ask them before they enacted some policies — especially if those policies would affect Indigenous people.

DaL candidate Mahum Azeem came forward next to answer the same question regarding decolonization — this time on behalf of Engage UVic.

Next up was a question for the Engage slate from Richins — the DaL candidate from Hear who had collected the cigarette butts: “Do you support the people of Unist’ot’en?”

Although DaL candidate Dryden Liden-Bremner from Engage responded from the audience — “Yeah, I think we all do” — nobody from Engage came to the microphone to respond.

Next, a question from Jesse Green, candidate for Director of Student Affairs of Engage, addressed the Hear slate.

“I’m just curious as to how you can claim to be listening to students when you’re completely ignoring one-fifth of the [student] population, which is international students.”

“A campaign slogan of yours is, ‘Vote Hear UVic, we’re listening,’ which is clever, good job, I like it,” prefaced Green. “But I’m just curious as to how you can claim to be listening to students when you’re completely ignoring one-fifth of the [student] population, which is international students, when you don’t put forward a rep to run for this election.”

Green is referring to the Hear slate’s absence of a Director of International Student Affairs candidate. As a result, the Engage slate’s candidate, Efe Türker, is acclaimed.

“I think that’s a really important question,” said Cook. “That is a value to us — obviously we took great pains to make our slate as diverse to meet the many needs of students. So why haven’t we had an international student? For one, I really like Efe Türker. I met him at the Women’s March and I was very impressed with him. I thought he was a great candidate, so honestly, Hear UVic isn’t too upset about there just being one international student candidate.”

Cook added that Hear UVic had an international student lined up for the position of Director of International Student Affairs, but they backed out the day before nominations closed.

As he stepped away from the microphone, Cook was reminded by fellow members of the Hear slate in the audience that their platform is offered in five languages on their website.

Discussion on the subject of international student representation was far from over. Marshall Scott-Bigsby, candidate for Director of Finance and Operations on the Engage slate, followed-up with a similar question to Hear UVic.

Questions regarding diversity of representation continued. “I just wanted to know what your Indigenous representation was, and how you plan to integrate Indigenous voices into your slate and address Indigenous issues?” asked a member of the audience to the Engage UVic slate.

Azeem from the Engage slate came up once more to respond.

“We want to focus on intersectional politics more than identity politics.”

“We do have Indigenous representation — if they wish to self-identify, they can anytime,” she said. “We want to focus on intersectional politics more than identity politics.”

A few minutes later, another question from the audience addressed Azeem’s answer. “If you have Indigenous representation on your slate, why aren’t they identified and why isn’t it a part of your platform if that’s something that’s important to you?”

This time, DaL candidate Rashmini Shunmugam from Engage came forward to respond, reiterating Azeem’s previous answer. “The person … can self-identify if they wish, and we want to focus on intersectionality.”

But audience members remained unsatisfied with the responses from some members of the Engage slate. Another audience member came forward, calling to question candidates’ use of the term intersectionality.

After a pause, Director-at-Large candidate Lulu Wise from the Engage slate came forward. This was the first time they came up to answer a question, aside from their presentation at the start of the event.

“On behalf of our slate, we are very committed to Indigenous voices and the Indigenous population on campus and letting their voices be heard — that is something that we are focusing on in our campaign,” said Wise.

“It’s not something that we’re trying to hide or push away. Just because we’re not talking about it doesn’t mean we’re not focused on it.”

The debate ended on a positive note, when a candidate from each slate came to the mic to state one positive thing about the other slate.

Following a few more questions, the debate ended on a positive note, when a candidate from each slate came to the mic to state one positive thing about the other slate.

But the forum was not yet done. Following a 10-minute break, it was time to move to the referendum part of the event. Although the room had nearly emptied at this point, a proponent for each of the four referendums, and one opponent for the VIPIRG referendum, delivered a short presentation regarding their respective stances.

No proponent or opponent strayed drastically from their previously-stated arguments, as outlined in the Martlet’s coverage here: the Campus Community Garden, the Student Advocate position, the Peer Support Centre, and the Vancouver Island Public Interest Research Group (VIPIRG).

This time, question period was relatively tame. Questions were only asked regarding the VIPIRG referendum, but discussion was limited due to the possibility of VIPIRG taking legal action against the UVSS Board for libel.

The event ended early and what was left of the crowd trickled out of Vertigo. Although the end of the All Candidates Forum signified the end of all official UVSS Elections-related events, it’s certainly not the end of campaigning. With just under a week to go, there’s sure to be more news as the days unfold. And if not, the Martlet will be back on March 8 to deliver the results.

For the purposes of brevity, clarity, and readability, not every discussion, Director-at-Large candidate, referendum, or moment from the forum was included in this article. To read a more expansive account of the debate, check our live Twitter coverage or watch our Facebook livestream. You can also listen to the entirety of the forum at CFUV 101.9 FM.

Students can vote online March 6-8. Confused by some of the terminology in this article? Check out our briefers on all things UVSS and UVSS Elections.

We’ve also covered the candidates from the Engage slate and the Hear slate, as well as the lone independent DaL candidate Isha Dhillon.