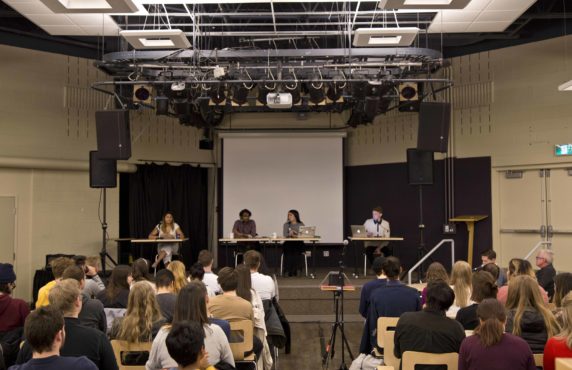 The Lead Director Debates on Feb. 27 saw an afternoon of spirited discourse, revealing questions, and according to the results of one poll conducted by the Martlet, far too many “Hear” and “Engage” related puns.

Candidates from the two slates, Engage UVic and Hear UVic, responded to questions from CFUV radio station, the Martlet, and audience members, resulting in a lively and passionate debate — a step up from the previous UVSS election, where most candidates ran unopposed. The floor of the Vertigo Lounge was split nearly down the middle between the two slates’ candidates and supporters, with tables further back full of other potential voters and students who soon realized they had picked an unfortunate location to study for their midterms.

One of the more hotly-contested debates of the afternoon was between the candidates for Director of Outreach and University Relations, Isabella Lee (Engage UVic and current UVSS Board member) and Jonathan Granirer (Hear UVic), on their proposed methods of student outreach and consultation. 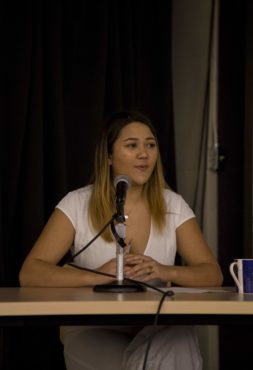 Isabella Lee is running for Director of Outreach and University Relations for the Engage slate.

“Right now, the UVSS is run by insiders, for insiders,” Granirer said. He hopes to reach out to students each week to hear what they have to say, by walking around campus with a clipboard and talking to them one-on-one.

If elected, Lee wants to instate regular town hall meetings to give students what she feels is a more accessible option for direct consultation than the question period in UVSS board meetings (which is sparsely attended, except on rare occasions).

Lee also plans to implement bylaw changes that will allow students to bring UVSS policies they are dissatisfied with to an arbitration panel.

Another standout moment came when Juliet Watts (Hear UVic), running for Director of Campaigns and Community Relations against Nathan Daisley (Engage UVic), made the case for a stronger stance on lobbying UVic for divestment from fossil fuels.

Previous UVSS boards and student senators — including Daisley, a current senator — were elected with platforms that Watts feels used divestment as a buzzword, without follow through. This is something Watts hopes to change.

“A lack of stance is a political stance,” Watts said, in regards to UVic’s current position on divestment. “Not divesting is a political move, and it’s a very clear political one.” 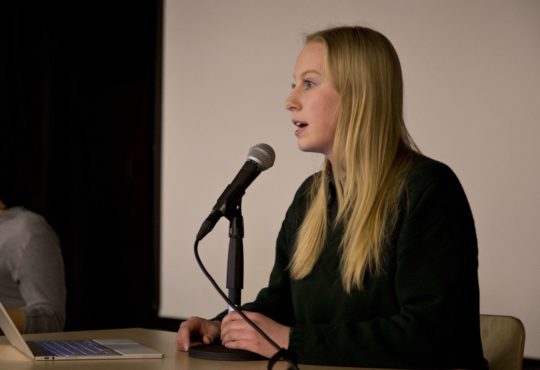 Juliet Watts is running for Director of Campaigns and Community Relations for the Hear slate.

(NSU), and have the highest representation of Indigenous students on a UVic slate ever. Kolin Sutherland-Wilson, representative to the current UVSS Board from the NSU, is also running as a Director-at-Large (DaL) for Hear.

Some candidates used the debate to state changes and additions to their policies. This was especially the case for Engage UVic, whose website had less information regarding Lead Directors’ specific platform points than that of Hear UVic’s, prior to the debate.

Amrit Basi (Engage UVic), running for Director of Events, expressed that she wants to hold a large-scale outdoor event in the quad. For the last two years, current Director of Events Noor Chasib has made several efforts to accomplish a similar goal, with no success.

Marshall Scott-Bigsby (Engage UVic), a candidate for Director of Finance and Operations, announced that he wants to reduce the price of coffee in the SUB to “make life a little bit less expensive” for students and to increase coffee sales. 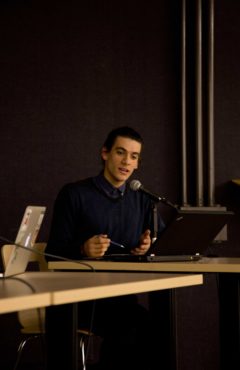 Dakota McGovern is running for Director of Finance and Operations for the Hear slate.

“The UVSS is heading towards financial collapse,” McGovern said, alleging that for the last three years, some SUB food service venues and Cinecenta have been increasingly losing students’ money.

However, the current Director of Finance and Operations, Curtis Whittla, has recently anticipated that the UVSS’ debt will be gone by the end of the year.

Scott-Bigsby, meanwhile, wants to continue the work of previous boards, whom he feels have “righted the ship” financially. 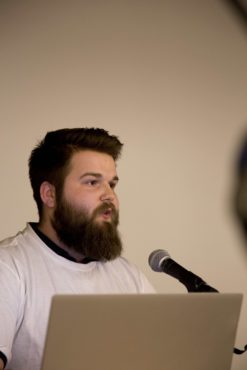 Marshall Scott-Bigsby is running for Director of Finance and Operations for the Engage slate.

Later in the debate, McGovern backtracked somewhat, stating that the reduction of the UVSS debt over the last three years has been a big accomplishment, and he feels the organization should financially “keep going in the direction we’re going.” He added that the UVSS could be getting out of debt quicker by making student union businesses more profitable.

Several times that afternoon, Efe Türker (Engage UVic), the acclaimed Director of International Student Relations, expressed disappointment in being the only candidate for his position despite international students making up 20 per cent of the student population. The day before nomination papers were due, the potential Hear UVic candidate for Director of International Student Relations decided not to run. 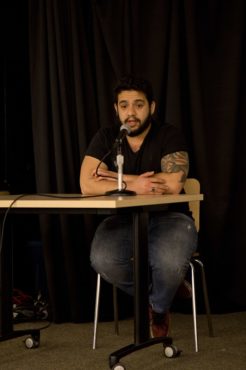 Efe Türker is the acclaimed candidate for the position of Director of International Student Relations. Türker is part of the Engage slate.

Last year, no one ran for the Director of International Student Relations position, and the current Board has been Director-less in that regard for the entire year.

After questions from CFUV and the Martlet, candidates for Lead Director positions fielded a myriad of questions from the audience — including many on sustainability, the VIPIRG referendum, and diversity of representation.

Ainsley Kerr, current Director of Campaigns and Community Relations, asked Hear UVic about a campaign video released that day, in which Granirer eats habanero peppers while discussing that he decided to run after “seeing the current board neglect their promises and neglect to engage with or advocate for students in any meaningful way.”

Kerr spoke about the progress seen on UVSS campaigns in the last year — including the new summer U-Pass, the province’s very recent removal of interest from student loans and their creation of a 24-hour mental health helpline, and the continued collaboration with UVic on Rent With Rights, a campaign that promotes affordable housing for students.

“In my capacity as the UVSS Director of Campaigns, [I] was directly involved in the consultation and advocacy that preceded all of these accomplishments,” Kerr said. “So can you please let me know why you believe why this was not meaningful advocacy?”

Granirer expressed that he felt student consultation should have been more substantial, as he had personally experienced difficulty attending committee meetings — to which Kerr clarified that she specifically scheduled two meetings around his class schedule. 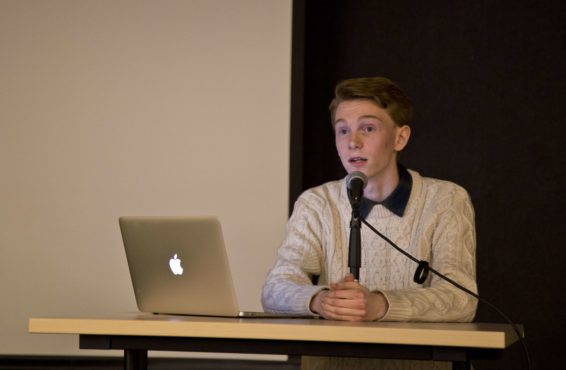 Jonathan Granirer is running for Director of Outreach and University Relations for the Hear slate.

One member of the audience asked Daisley about statements he made about UVic student politics in an interview with the Martlet in 2017, when he first ran as a candidate for View Royal city council. 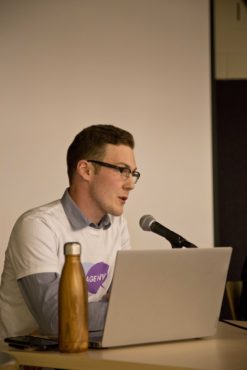 Nathan Daisley is running for Director of Campaigns and Community Relations for the Engage slate.

“I find the stakes are so low that everyone takes them too seriously,” Daisley said in the article, when asked about campus politics. “I’m not interested in the UVSS or the Senate.”

Daisley is currently a UVic student senator, and was previously campaign manager for the Envision slate in 2018.

In response, he reaffirmed his belief in the low stakes of student politics, but also expressed enthusiasm to represent students and that his opinion has changed to a certain degree.

For the purposes of brevity, clarity, and readability, not every discussion, Lead Director candidate, or moment from the debate was included in this article. To read a more expansive account of the debate, check our live Twitter coverage or watch our Facebook livestream. You can also listen to the entire debate at CFUV 101.9 FM.

Students can vote online March 6-8. Confused by some of the terminology in this article? Check out our briefers on all things UVSS and UVSS Elections.

We’ve also covered the candidates from the Engage slate and the Hear slate, as well as the lone independent DaL candidate Isha Dhillon.

Missed the All Candidates Forum from Thursday, Feb. 28? Read our summary here.