In a world of thorns, the Martlet decided to stray from the usual by focusing on the roses of 2018 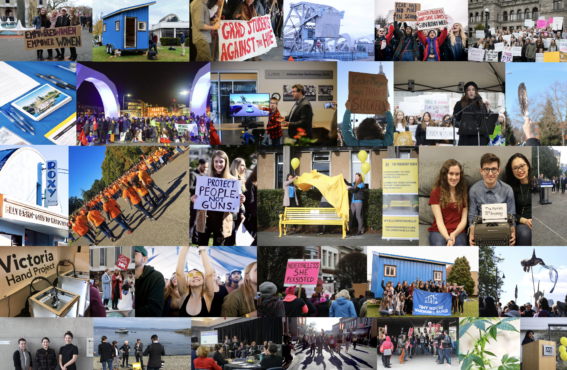 2018 photos by Martlet staff and contributors.

2018 has been a tumultuous year. The United States federal government implemented a family separation policy that saw children as young as five detained in cages, the United Nations announced that we have just twelve years before the climate reaches a point of no return, and the global rise of the far right extended to Brazil with the election of President Jair Bolsonaro. The global inequality gap between the rich and poor widened, shootings in the United States continued at alarming numbers, and civil wars ravaged areas of Africa, Central and South America, South East Asia, and the Middle East, causing increasingly problematic migrations and refugee movements worldwide.

Here in Victoria, we’ve seen UVic hike international tuition fees; we’ve experienced the ongoing feud between British Columbia and Alberta due to a moral divide on the controversial, now government-owned, Trans Mountain pipeline; B.C.’s housing crisis has continued to disproportionately affect the most vulnerable; and the seemingly unstoppable opioid crisis has continued to destroy families and communities across Canada.

But hey, isn’t that enough bad news for now? We’re constantly overwhelmed by it — and society is not all bad, is it? Don’t worry, we’ll be back to our usual doomsday selves come 2019. But for once, we’re taking a look at the positive: here’s some of the good stuff that happened in 2018.

The provincial government announced they will be partially funding a $200 million dollar housing project at UVic, increasing housing on campus by 25 per cent. The new buildings will also be LEED-certified (an international standard for environmentally responsible building construction and design), making for one of the largest Passive House-certified projects in Canada.

UVic launched the world’s very first Indigenous law program, which will not only bring global attention to our relatively small university, but also represent a new step towards greater reconciliation for Indigenous peoples in Canada and the world.

On March 31, 2018, Victorians finally saw their new Johnson Street Bridge open for business. After nearly a decade of logistical hangups, over $105 million of expenses, and several different shipments of steel in a slow boat from China after the first new bridge was rejected, this was a day some in the city doubted would ever arrive.

Although the final decision is still expected to come through this week, it looks like protesters in Saanich have saved 29 Garry Oak and Douglas Fir trees from being cut down on Grange Road, where a sewage pipe project was going to require their removal. After the neighbourhood and some city counsellors protested, project officials returned to the drawing board to see how they can go ahead with the project without cutting down the trees. This small-scale example shows how effective it can be when individuals unite to raise our voices. As the Times Colonist reported, Saanich Mayor Fred Haynes told the protestors, “You have been heard. I think that’s the very important first step.”

And speaking of civil action, about 250 people gathered just last week and stopped traffic on the Johnson Street Bridge, all in the name of a better climate. In spite of what seems like a global standstill on taking real action to stop irreversible climate change, Bobby Arbess, one of the rally’s organizers, said, “As the world’s nations gather once again to talk about what they’re going to do to address the climate crisis, we as citizens of the world are rising up to tell them that we are not waiting for them.”

At the provincial level, after years of inaction, news is beginning to be made public regarding corruption in the private and public sectors of British Columbia. We’ve learned that B.C. casinos have been a hot spot for the laundering of illegally-acquired money, mainly gained from the opioid crisis. We’ve learned that crime networks have laundered over $1 billion in illegal money through Vancouver’s housing market — again, largely gained from the opioid crisis. Though these two revelations may sound like bad news, the fact that they are out in the open could be a first step to mitigating the two greatest issues B.C. is currently facing: housing, and drug overdose and addiction.

Meanwhile, the provincial government’s recently-released climate plan has B.C. looking to regain its long-lost title as a climate leader, as all new buildings must be zero-net energy by 2032 and all new cars sold must be zero-emission by 2040.

On an international scale, Time Magazine has chosen to give the title of their Person of the Year to what they have called “The Guardians” — the murdered or imprisoned journalists who have sacrificed themselves for the sake of telling and exposing the truth. This includes the murdered Saudi Arabian journalist Jamal Khashoggi and staff of the Capital Gazette, the Maryland newspaper where five people were murdered in a shooting in June. Although the muzzling of journalists is yet another horrible sign of the times, we are grateful to Time Magazine for honouring these courageous individuals.

And after years of stigma and harsh sentencing, Canada became the first G7 country to legalize recreational marijuana. We were so excited about it we dedicated a whole issue to this monumental event.

2018 was a good year for the Martlet, too. We celebrated our 70th anniversary this spring with a gala, fundraiser, and the creation of some pretty cool merch (which would make a pretty good holiday gift for any shirt-wearing, bag-toting person in your life, don’t you think?).

We covered the ongoing battle that UVic student Lilia Zaharieva has faced in trying to get coverage for the life-saving drug she needs for Cystic Fibrosis — and broke the news when a drug company gifted her a lifetime supply of that medication in March.

We investigated the problematic implementation of UVic’s Sexualized Violence and Prevention policy, the unhealthy relationships some supervisors have with their international graduate students, and the divisive climate in the Sociology department. These stories gave a platform to the voices of people impacted by harmful university practices and policies, and highlighted where UVic can do better.

We’re not going to lie — we had to initially wrack our brains to think about the good news. But once we got the ball rolling, it really wasn’t all that hard. Once we acknowledged that good news often comes from adverse and difficult circumstances, it became easier to think about all the ways the world championed over difficult times. Honestly, we can’t sum it up much better than the great Albus Dumbledore, i.e. J.K. Rowling, so we’ll leave you with his words instead of ours:

“Happiness can be found, even in the darkest of times, if one only remembers to turn on the light.”